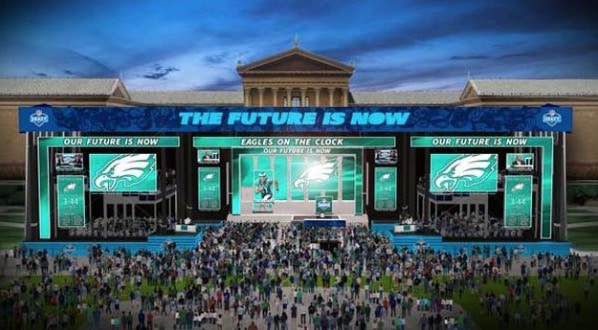 THE NFL DRAFT IN DALLAS: NOT AS GREAT AS LAST YEAR IN PHILLY!

For the first time this year, three networks — ESPN, the NFL Network and now Fox Sports — televised the proceedings. More than 2,000 media passes were issued this year, more than double the 904 issued in 2010, the first year the draft was held in prime time. A supersized draft costs millions of dollars to produce, but the NFL says it now essentially breaks even.

Now that the draft is fully unshackled from New York, where it took place for nearly a half-century, the NFL intends to continue taking its show on the road.

Twenty other cities have expressed interest in playing host to the event in the coming years, a list that has been narrowed to five finalists: Canton/Cleveland, Denver, Kansas City, Las Vegas and Nashville. At the owners’ meeting at the end of May, two of the five cities will be chosen to host the 2019 and 2020 Drafts: