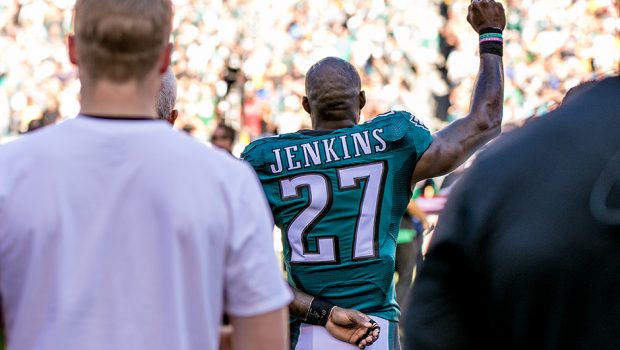 “What we can’t do,” the NFL official said, “is get to next season and still be in this position.”

The opening of the 2018 season is three days away, and that is exactly where the NFL finds itself.

The revised anthem policy ratified by the owners at that May meeting, which amounted to an attempt to satisfy everyone that ended up satisfying almost no one, has been on hold since July as part of an agreement with the NFL Players Association. The league and union continue to attempt to reach a compromise on a mutually agreeable policy.

But that is considered unlikely to take place before the new season begins Thursday night in Philly with the Super Bowl champ Eagles playing the Falcons, leaving the NFL still in the position of trying to run its business amid a polarizing national debate over peaceful protest, race relations and patriotism.

Several of those familiar with the anthem deliberations said in recent days they don’t expect a solution to be negotiated before the Eagles, the defending Super Bowl champions whose White House invitation was revoked by Trump last June after many players said they would not attend, host the Atlanta Falcons in Thursday night’s opener.

That would require an unexpected last-minute breakthrough, they said, even though some people involved are still holding out a sliver of hope for an agreement in the coming days or weeks.

Owners want players to agree to stand for the anthem. The union has so far backed the players’ right to protest. That leaves very little middle ground on the issue, and both the league and union must deal with factions within their ranks, complicating deliberations even further.

“I don’t know if there’s a solution there,” a person with knowledge of the issue, who spoke on the condition of anonymity because the league and union have pledged to keep their talks confidential, told the Washington Post. “Even if the union asks some of these players to stand, their reaction might not be much different than if the league asked them.”

Any compromise would likely have to involve an endorsement by the players of standing for the anthem, some within the sport speculate, perhaps in return for a concession by the owners on discipline for any player who still chooses to protest. But work remains to get to that point.

Players have said the protests, begun by quarterback Colin Kaepernick when he was with the San Francisco 49ers in 2016, are about bringing attention to issues of racial inequality and police treatment of African Americans, with no disrespect to the flag or the U.S. military intended. But others say that conducting the protests during the anthem is disrespectful to the flag and military, framing the issue as being one of patriotism.

Television ratings have sagged, for reasons that remain open to interpretation, while the NFL and its commissioner, Roger Goodell, have been faulted by many critics. That includes Trump and other politicians who have seized on the topic as a political issue.