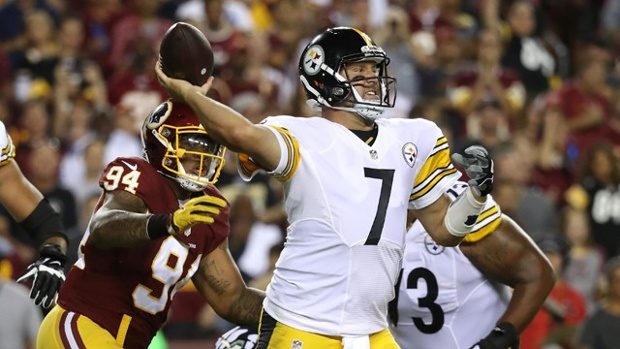 In the second quarter, with the Steelers facing a fourth-and-1 from the Washington 29 and the defense crowding the line to defend a power run that is typical in that situation, quarterback Ben Roethlisberger (above) instead lofted a deep rainbow toward the corner pylon to Brown, who made a mockery of Bashaud Breeland’s coverage.

The Pittsburgh Steelers came to Washington last night and hammered the Redskins into submission:

In getting drubbed 38-16, Washington received quite the reality check from one of the best teams in the NFL.

Antonio Brown, the NFL’s best receiver, lived up to his rep and provided highlight footage by torching Washington for two scintillating TDs as part of his eight-catch, 126-yard night.

Yet the fact that Washington made no semblance of a forceful statement while opening its season before a national TV audience underscored just how far coach Jay Gruden’s team has to go before it can be a legitimate contender.

Last season, when Washington rode quarterback Kirk Cousins on a worst-to-first rise to win the NFC East, the half-empty component was that it didn’t beat a single team with a winning record. Whenever they faced the big boys, they couldn’t measure up. That’s how the season ended, too, with the wild-card round loss at home to the Green Bay Packers.

New season or not, the pattern has continued. The Steelers, widely regarded as a Super Bowl threat, represent what Washington aspires to become — a team that can rise to the moment.

“The Steelers have been consistently good for a long time, and that’s what we’re trying to do,” said Gruden, beginning his third season as Washington’s coach. “We thought we were ready to compete.”

In the second quarter, with the Steelers facing a fourth-and-1 from the Washington 29 and the defense crowding the line to defend a power run that is typical in that situation, quarterback Ben Roethlisberger instead lofted a deep rainbow toward the corner pylon to Brown, who made a mockery of Bashaud Breeland’s coverage.

The play call was a statement in itself. After bypassing a field-goal attempt in the 46-yard range, Steelers offensive coordinator Todd Haley swung for the fences rather than trying to move the chains with a safe run. Explained Pittsburgh coach Mike Tomlin: “That’s who we are.”

From that moment, with Pittsburgh grabbing its first lead at 7-6, the momentum was all with the Steelers, supported by their flock of traveling fans waving those Terrible Towels. The home team was forced to play catch-up the rest of the way, which pretty much sums up the big-picture difference between the two teams.

Other examples included a 3-yard Roethlisberger TD pass just before halftime that caromed off Sammie Coates and into the arms of Eli Rogers. In the third quarter, Big Ben (27-for-37, 300 yards, three touchdowns, one interception) scooped up a low shotgun snap that was wrapped in disaster and calmly gathered the football and himself to rifle a 42-yard strike to Coates. In the fourth quarter, after the lead was trimmed to eight, the Steelers responded with another score — capped by DeAngelo Williams’ 15-yard touchdown run — that was kept alive when Roethlisberger coolly stepped up in in the pocket on third-and-13 and fired a 14-yard completion to Coates. (Williams, by the way, cast light on another Washington issue by shredding the defense for 143 rushing yards and a pair of TDs.)

All told, it served to illustrate just how wide the gap is between Washington and the NFL’s elite.