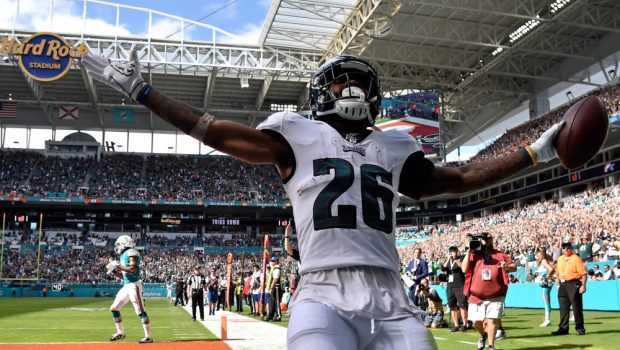 NFC EAST HAS BEST GROUP OF RUNNING BACKS IN THE NFL!

The NFC East has two of the five best backs in the league, with Elliott and Barkley. It has another guy who looks just about ready to join that group, with Sanders, who looked every bit of a three-down back last season while totaling 1,327 yards and six touchdowns scored on 229 touches.

That group is strong enough that it doesn’t even necessarily need to be supported by two of the most efficient backups in the league to earn the No. 1 ranking, but those guys exist anyway. Pollard led the NFL in elusive rating last season, according to Pro Football Focus, and emerged as an excellent pass-catcher and tackle-breaking machine who created a ton of big plays. Scott may be diminutive in stature, but he was fantastic in limited action last year. The Eagles don’t need him to be anything more than a spark plug behind Sanders, and he’s a terrific fit for that role.

Peterson somehow just keeps churning out like four-and-a-half yards per carry like clockwork, pretty much every year. He’s a total zero as a pass-catcher but on a team so committed to the run, he’s a dependable option to be able to turn to. Clearly, Washington would prefer Guice stay on the field and become something resembling The Guy at some point, but whether he’ll be able to is an open question. Gibson is a dynamic hybrid player who has been compared by the coaching staff to Christian McCaffrey. Nobody’s that good, but if he can be a Chris Thompson type for them, that’ll help a decent amount.