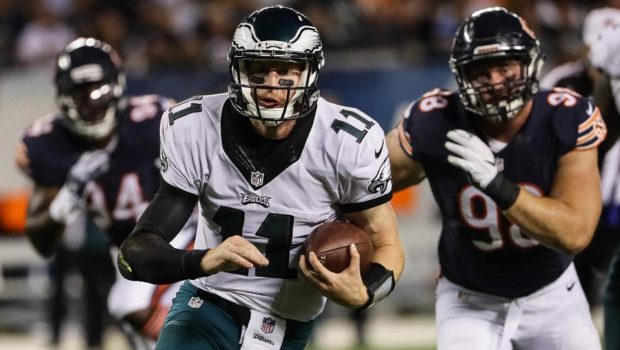 NEXT UP FOR EAGLES AND KID CARSON: BIG BEN AND THE STEELERS!

After two relative cream puffs, Week 3 does offer an interesting test for the Eagles.

The Pittsburgh defense likely won’t get a ton of pressure on Carson Wentz, as it has yet to notch a sack in two games. But keeping pace with the Steelers’ high-powered offense will prove to be the challenge.

While the Eagles will bring pressure, as is defensive coordinator Jim Schwartz’s wont, the Steelers boast one of the league’s better offensive lines. Antonio Brown alone makes for big matchup problems in the secondary. Wentz will have to find a way to keep up.

Should Philly prevail in Week 3, that could draw comparisons to the rookie season of Ben Roethlisberger, whose team rolled off 14 wins in a row after he took over the starting job early in the 2004 season.

Wentz is the first rookie starting quarterback to win his team’s first two games since 2009, though the last passer to do that was Mark Sanchez … so, as usual, quarterback wins may not be the best indicator of performance.