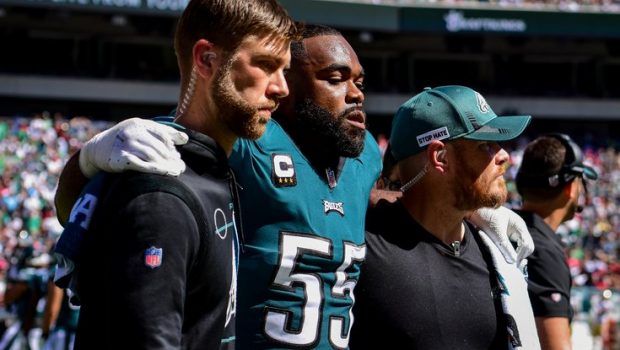 NEXT MAN UP A NICE IDEA, BUT GRAHAM, BROOKS ARE IRREPLACEABLE

Just like that, the Eagles lost two of their important players yesterday:

Defensive end Brandon Graham for the season with a torn Achilles. And right guard Brandon Brooks with a yet-to-determined chest injury.

Quicker than you could say NEXT MAN UP.

“It’s always tough and it was a pretty emotional moment for me to see BG limp off the field because me and BG have played so much ball together. To see him walk off the field was pretty rough for me,” defensive tackle Fletcher Cox, who has played with Graham for 10 seasons, said.

“We know BG, he’s in a good spot right now and we’ll talk once he figures out what’s going on. At the same time, we got his back. We’ll go from there and get ready for the next game.”

“Just hearing Fletch talk about it, that is obviously one of our captains. That is huge. That emotional leader,” said linebacker Alex Singleton on how hard it was watching Graham in pain. “You guys all know him. He always has a smile on his face and is always doing the right things. He is always one of those guys that could always overlook somebody. I remember when I was still on the practice squad and he was the guy every day telling me I would play someday. He is that guy for this team and he’ll still be that guy. That’s the best part about him; that we might lose him on the field, but we won’t lose him in the (locker) room and in the building.”

The two veterans have been with the Eagles for several years, and their shoes are big to fill.

“It’s terrible. He’s probably one of the greatest humans that I’ve had the pleasure of playing with and competing with for eight, going on nine years,” tackle Lane Johnson said of Graham. “He’s really the heartbeat of this team by the way that he conducts himself, the way he leads, and the way he plays. I’m not sure what the extent of the injury is, but I’m heartbroken for him.”

The Eagles employ a deep rotation at defensive end, but more will be asked of veteran Ryan Kerrigan and young pass rushers Tarron Jackson and Milton Williams, regardless of the timetable for Graham’s injury.

Graham is the longest-tenured Eagle, in his 12th year with the Eagles, while Brooks, a Pro Bowl guard, is in his sixth year.

“You can’t replace those types of players. Younger guys have to step up, and we have to press on. It’s terrible because Brooks is one of my best friends, he’s been the best guard in the league for a long time, and he was doing well so far this season,” said Johnson on Brooks’ injury. “Not having him out there is a tremendous loss for us. Having him out there might have been the difference between us winning and losing.”

Rookie second-round pick Landon Dickerson stepped in for Brooks in his NFL debut.

“Obviously it’s a tough situation to be thrown into. He didn’t get a whole Training Camp and everything, but I think Landon did a hell of a job,” center Jason Kelce said. “They’re a good defense and I know we’ve got a lot to improve on across the board.”