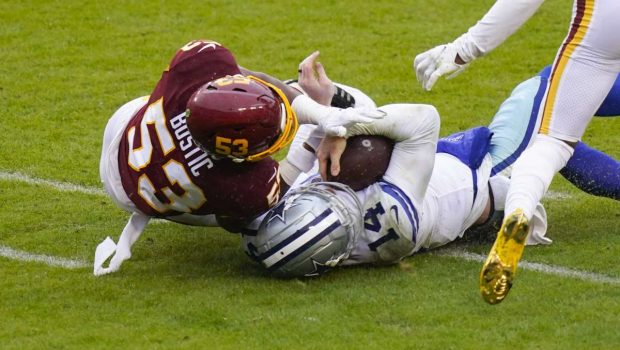 Starting his second game for an injured Dak Prescott, Andy Dalton was forced to the locker room in the third quarter after taking a big hit from linebacker Jon Bostic on a third-down scramble. Dalton went straight to the locker room and later was ruled out for the game after being diagnosed with a concussion. Bostic was ejected.

When the Eagles kick it off next Sunday night against the dreaded Dallas Cowboys at the Linc, they’ll be facing the worst team in the NFC East.

Which is not an overstatement.

How bad was today’s Cowboys’ 25-3 loss to the Washington Football Team?

With 9:54 left in the second quarter, WFT took a 15-3 lead – and the feeling that this game was out of reach already for the Cowboys was not only overwhelming, it was absolutely right.

It wasn’t just another horrendously played game by Dallas, it had the latest in the seemingly interminable string of critical injuries as Andy Dalton went out in the third quarter after taking a late and clearly dirty hit to the head from John Bostic. We got to see Ben DiNucci, who wasn’t horrible – just lining up way before we ever hoped to see him on the field in a meaningful situation.

The Washington defensive line was all over Andy Dalton all game, leading to him screaming at his offensive line – which may not have been completely fair, given how injuries have absolutely devastated that group. Normally sure handed receivers like CeeDee Lamb and Michael Gallup suddenly could not catch anything. Only Amari Cooper seemed to have come to play.

Dalton may have been angry in the first half, but he also had the first huge mistake of the game, losing a fumble inside the Dallas 15, which wound up bouncing into the end zone, where Dalton Schultz recovered it.

WFT took a 22-3 lead into halftime, and the Cowboys predictably did nothing with the ball coming out of half.

One thought on “NEXT UP FOR EAGLES: COWBOYS, WHO WERE EMBARRASSED BY WFT!”