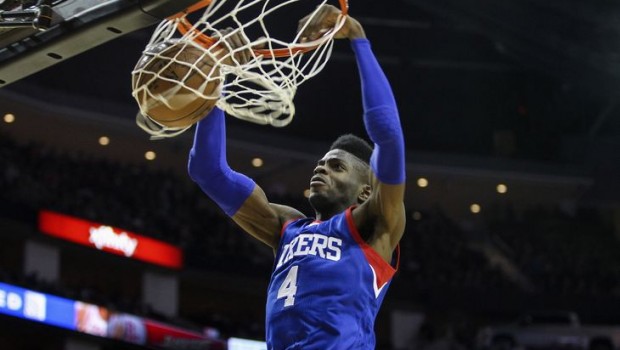 Tonight’s Sixers’ game in Boston will not approximate anything like Wilt vs. Russell in the 1960s or Bird vs. Dr. J in the 1980s.

No, these two are NBA dead-enders who are trying to shape their identities more than win games. But for the newly feisty Sixers they need to take that success on the road, where their recent competitiveness still hasn’t produced positive results.

The 76ers are only one-half game better than last-place New York in the Eastern Conference, but they’ve won three of their last five.

In his second season, the undrafted Thompson (7.8 points per game) is averaging 15.0 points while going 10 of 16 from 3-point range in the last three games. He scored 19 and hit all six shots, including four 3-pointers, in the first half Tuesday to help the 76ers take a 21-point lead into the break.

”I think now clearly he’s got his feet settled, and he’s playing with confidence,” coach Brett Brown said of Thompson, who missed 11 games in December and January because of an upper respiratory infection.

Philly has scored at least 100 points in consecutive home games against two of the league’s worst defensive teams in Minnesota and Denver, but has reached that mark once while going 5-21 on the road. The 76ers rank last in the NBA at 84.8 points per game and 39.1 percent shooting away from home, but hung in with two of the East’s top clubs in the last two.

They held East-leading Atlanta to 43.6 percent shooting, made 14 of 35 3-point attempts and overcame a 21-point deficit to take a late lead before falling 91-85 on Saturday. Two nights later, the 76ers nearly erased a 20-point deficit at Cleveland, where they hit 12 3s and forced 18 turnovers in a 97-84 loss.

The Sixers dropped the first two meetings this season with Boston at home but recorded two of its nine road wins in 2013-14 against the Celtics.

Michael Carter-Williams, who had 15 points, 12 assists and eight rebounds versus Denver, totaled 24 points in this season’s two games with the Celtics, but scored that many in a 111-102 win in Boston on April 4.

The Celtics (18-30) blew a 10-point fourth-quarter lead and fell behind before rallying to beat Denver 104-100 on Wednesday. Boston never trailed the night before in a 108-97 win at New York.

“We’re learning how to win, especially in the close games,” said guard Avery Bradley, who has scored at least 17 in three straight games.

Benched at the start for a second straight home contest because of tardiness, leading scorer Jared Sullinger (14.1 ppg) had 14 in just 21 minutes and made two free throws with 22.8 seconds left.

”Everybody in this locker room has probably been late one time,” said Sullinger, who scored 22 against the Knicks. “They understood. Things happen.”