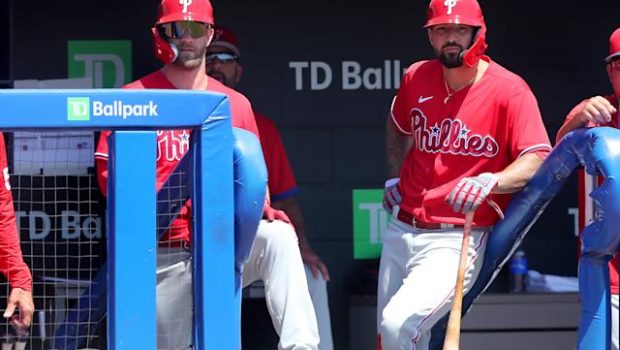 NEWBIE PHIL NICK’S BIG STICK GETS OFF TO A GOOD START!

Nick Castellanos went 1-for-2 with a single and a walk in his first game action since Oct. 3 as the Phillies beat the Blue Jays 10-5.

“I’ve always been somebody where it doesn’t take me a lot of at-bats to feel good,” Castellanos said. “Honestly, all three at-bats today, I felt pretty good.”

That was the feeling for the majority of Philadelphia’s lineup.

“Seeing Castellanos up there was great,” said Harper (left above with Nick), who added a sixth-inning single in addition to his two homers. “I mean, being able to get him in the lineup today, I had a good feeling with him in our lineup. I thought everybody swung the bat well and everybody looked really good today.”

The Phils’ other big offseason addition, Kyle Schwarber, in the lineup.

“We still don’t have them all in the same lineup, you know?” Girardi said. “But I just feel like we’ve added a lot of offense. The organization has done a great job.”

“It’s no secret, right? We have a chance to be very, very good,” Castellanos said. “At the end of the day, it’s our responsibility to do it. I’ve been on a lot of teams where, on paper, we should win the World Series, and we’ve come up short. So I’m not somebody that likes to talk about guarantees, but we definitely have pieces in place.”