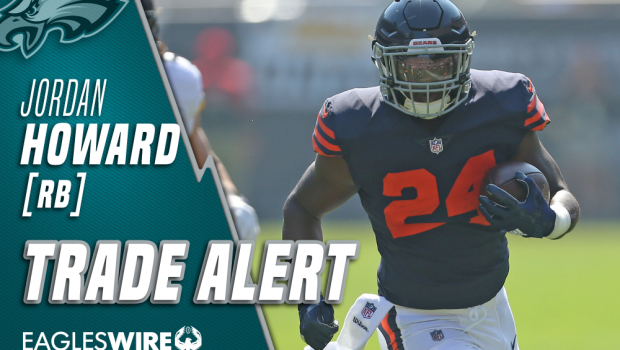 Two seasons ago Jordan Howard, the Bears’ fifth-round pick, rushed for 1,313 yards and six touchdowns on 252 carries, good for a league-leading average of 5.2 yards per carry.

He wasn’t quite as effective last season but nevertheless seemed firmly entrenched as the Chicago Bears’ primary back of the present and future.

That status proved short-lived, however, as Howard received the fewest carries of his career last season and averaged just 3.7 yards per carry while Chicago gave more of its backfield workload to electric playmaker Tarik Cohen.

In response to his diminishing production, and perhaps getting ahead of his free agency next spring, the Bears traded Howard to the Eagles in late March for a sixth-round pick in the 2020 NFL Draft – pennies on the dollar for a player once poised for superstardom.

He’s no longer expected to be a dynamic every-down back.

ESPN’s projections for him in 2019, though, paint an especially unspectacular portrait of Howard’s potential production. He’s predicted to rush for 622 yards and four touchdowns while averaging 4.1 yards per carry, and catch 16 passes for 124 yards and no scores.

It bears mentioning that Howard played in a very limited passing attack with the Bears. The Eagles, needless to say, are stacked with quality receivers and led by franchise quarterback Carson Wentz, who many believe will rise back to MVP contention this season if fully healthy.

Will a far superior supporting cast make it easier for Jordan Howard to make hay on the ground? Perhaps, but ESPN doesn’t seem to think so.