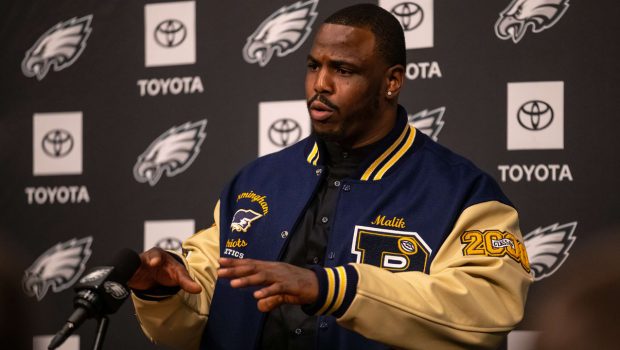 The Eagles already had one of the best defensive lines in the NFL, led by Fletcher Cox.

And they added Malik Jackson to make their defense even scarier.

Jackson is in an unfamiliar situation, coming to a team that already has a star defensive lineman at his position, Fletcher Cox:

“It’s a very, in my opinion, very player-friendly vibe, but they also understand what it means to work hard. When we’re meeting, when we’re eating, everybody’s laughing, everybody’s talking, and then when we’re in the weight room, not too much talking, we’re working and pushing, and I like that. It’s nice.”

Since winning the Super Bowl a couple of years ago, Philly has become a place where players want to play. The team is having fun winning games but they’ve known when to flip the switch when the playoffs begin.

The last two seasons, the Eagles have come in as underdogs in the playoffs. In 2017, they took down the New England Patriots in the Super Bowl with Nick Foles under center.

Last season, the Eagles went into Chicago and beat the Bears to advance to the NFC Divisional Round. Once again, Foles worked his magic until Philly fell short against the New Orleans Saints in the Divisional Round.

Jackson comes from a Jacksonville Jaguars team that struggled this past season to do much of anything. Now, he gets to come to a team who’s one goal is to get back in contention of the Lombardi trophy in 2019.

The Eagles have the talent along the defensive line to make some noise—while also having fun in the process. The newly signed defensive tackle may have found a home in Philadelphia for the rest of his career.