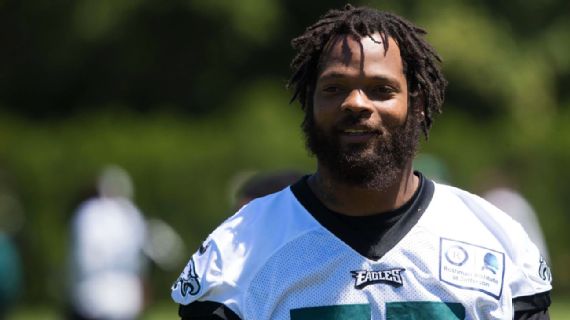 Well, I am sure the new defensive end made that clear.

He didn’t attend OTAs, which were voluntary after all, but he was practicing yesterday when mandatory mini-camp started.

Bennett, 32, was traded from the Seattle Seahawks in March for wide receiver Marcus Johnson and a fifth-round pick.

Two weeks later, a grand jury in Harris County, Texas, indicted him on a felony charge of injury to the elderly related to an incident at NRG Stadium following Super Bowl 51. He turned himself in a short time later and was released on bail. His next court hearing is scheduled for June 27.

“I just let my lawyer handle that and just do what I need to do on the field,” he said when the legal matter was brought up. “Me being here, it’s all about football and trying to be a great player, be a great teammate and be a great citizen.”

He worked primarily with the second unit during practice Tuesday, despite the absence of Brandon Graham, who is recovering from ankle surgery. Bennett is still in the early stages of learning the terminology.

“It will be tough, I think, with three days of work,” coach Doug Pederson said when asked what he expected to see out of Bennett during these sessions. “But he’s a veteran guy, not worried too much about where he’s at right now. It’s exciting to be able to have everybody out there and to see all the pieces for these next couple of days and then get them back here for camp in July.”

Bennett posted 8.5 sacks for Seattle last season while playing through plantar fasciitis. He’s expected to be a heavy part of defensive coordinator Jim Schwartz’s D-line rotation, attacking from both the outside and inside, to help make up for the losses of Vinny Curry and others. Although he is entering his 10th NFL season and new to a championship team, the three-time Pro Bowler said his expectations remain high.