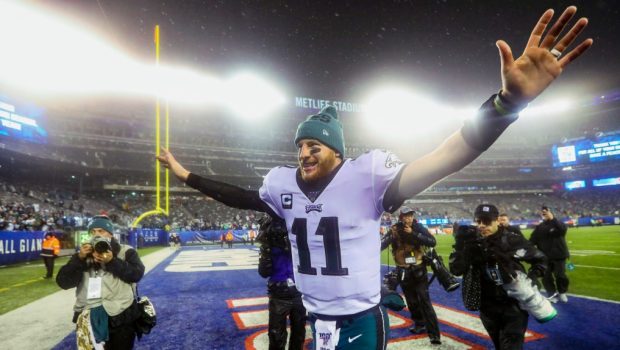 NEW WEAPONS WILL MAKE EAGLES WENTZ AN ELITE QB IN 2020!

The 2019 season proved to be incredibly strange for the Eagles. Injury issues were rampant across the roster, but most notably at the wide receiver position.

The situation left Carson Wentz without a multitude of options, but he made it work, ranking ninth among all quarterbacks in total points (292.9) and 20th in points per dropback (0.43). General manager Howie Roseman set out to ensure the offense would not be put into the same situation in 2020, opting to add young and speedy receivers — Jalen Reagor, Quez Watkins, John Hightower and even veteran Marquise Goodwin, though he opted out of the season.

Due to the bevy of receiver injuries, Wentz relied on his tight end duo (Zach Ertz and Dallas Goedert) more than ever. He ranked first in the league in pass attempts to tight ends (214). In addition to that, he ranked only 20th in pass attempts to receivers (244) and 23rd in average depth of target (aDOT) among all quarterbacks with 100-plus pass attempts.

Expect Wentz to do a lot of damage with his new weaponry at the position, and we have yet to discuss the potential of veteran DeSean Jackson returning from a season-long injury that limited him to three games in 2019. Wentz found a way to remain a top-10 quarterback with hardly any semblance of weapons surrounding him — his ceiling is astronomical this season.