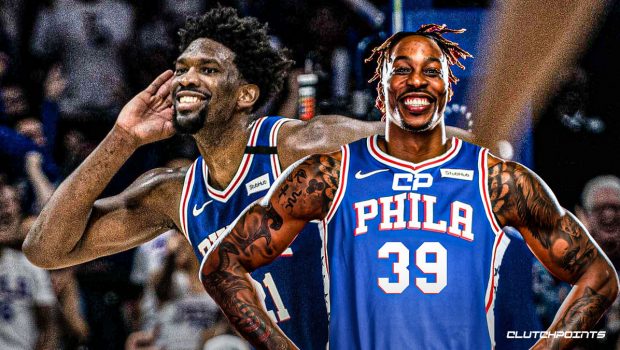 “Winning the championship was everything, and it made me realize I could have the best stats in the world and it don’t mean nothing,” Howard said yesterday in a video call after signing a one-year deal for the minimum in free agency. “Because here it was, I won a championship and there was games where I didn’t score a bucket, or get a field goal, or get minutes in a game. What really matters is just holding up that trophy.

“That would be my message to everybody on the team: What are you willing to give up to get that trophy? Sometimes you got to give up everything. Sometimes your role and what’s required of you [is] to give up the things you want to do the most. For me, I would have loved to be the guy to score all the points and rebounds, but my team needed me for a specific purpose, and that was to provide the spirit and energy on and off the court.

“I think I did a pretty good job at it, and whatever this team asks me to do, I’m willing to do it.”

After trading Al Horford to the Oklahoma City Thunder on draft night to better balance the roster, Sixers president of basketball operations Daryl Morey said that he would have coach Doc Rivers try to sell the best candidates available in free agency to come to Philadelphia and back up the team’s star center, Joel Embiid.

According to Howard, Rivers did exactly that, calling Howard shortly after free agency began at 6 p.m. ET Friday and telling him the Sixers wanted to sign him.

Howard, who turns 35 next month, said that ultimately was what pushed him to join the team.

“The reason why I was super locked in on being here in Philly is that Doc was the only coach that called me during this free-agency process,” Howard said. “He was the first one to call me and he said we want you. We want you on our team. And then Daryl called. I said this is where I need to be right now. This is where my journey is calling me. To Philly. I’m super happy that Doc called me, that he gave me the opportunity, and I told him yes. I told him I would come.”

“There’s a lot of things,” Howard said when asked why he thinks the Sixers can win a title. “You have two great young stars in Ben Simmons and Joel Embiid, I’m going to start there. Those guys, to me I watched when Joel lost [to the Toronto Raptors in the Eastern Conference semifinals in 2019] and how bad it hurt, he just cried, and I know what that feels like. I’ve been in that moment before where it’s like, ‘Man, I gave everything I had. I put it all on the line and I came up short.’ It doesn’t sit well with you, it stays with you for a really long time. So with him I know he has a fire inside of him, and we’ve all seen glimpses of it all year, and I think this is the year where it’s about being focused. I see focus in him, I see focus in Ben, and that’s where it starts with our two best players.

“Then you look at the rest of the guys on our team, they’ve all been hungry, they just never knew how to win. And I think by adding a guy like Danny Green and myself, we just fresh off of winning a championship, and I think we all know what it takes to really get to the next level. And I think this is a really great opportunity. You have a coach always talking about winning, how important it is to win, and you have some players who just want it. I think this year with the focus this team will have and the drive that we have to be successful, this will be our year.”

Howard, who was eating a lunch of baked chicken, sweet potato fries and corn during his video call, was also asked specifically about Embiid’s personality, and if it’s possible to be lighthearted — as Howard also was early in his career — and win at the highest level.

He pushed back strongly on the point, saying that he thinks Embiid puts in the requisite work, and that it doesn’t matter what his critics say.

“I don’t see what he’s doing as being goofy,” Howard said. “He puts in the work. I think people, they twist things around when they see people laughing and joking and having a good time and they say they’re not serious, or they’re not focused enough. It’s just a time and a place for everything.

“I think the things Joel does is great. It makes other opponents upset, it keeps him locked in and the team plays better. Now will there be times when we all have to be a little bit more serious? Yes. And that’s something we’ll all have to learn together. How to be in certain situations. But I don’t think that’s a part of sacrifice. I think that’s a part of just understanding time and place.

“And I think that will be good for me to help show some of the younger guys because I have been in that position before where people thought I wasn’t focused or that I was playing too much. Maybe for the people on the outside it did look like I was playing around too much. So it’s just finding ways to do things right for the team, and I think we’ll do that this year.”