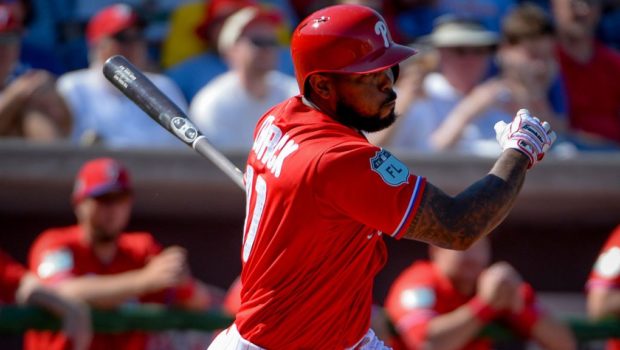 Howie Kendrick will be the Phillies’ opening day left fielder, but he showed his versatility yesterday by playing second base in a 9-5 victory over the Twins.

He will play a game at third before the end of camp, too.

“I always try to keep an open mind,” said Kendrick, who has started 1,084 of his 1,344 career games at second. “A long time ago, when I was a young guy, Chone Figgins told me to be open to moving anywhere. If they ask you to do something, never say no. Just say, hey, I’ll try it.”

Kendrick’s ability to play first, second and third base, as well as left field, means the Phillies can carry just one utility infielder on the 25-man roster. Infielder Andres Blanco is that guy, and he is a lock to make the team.

Outfielder Aaron Altherr is a lock, too.

That leaves three bench jobs available. The Phillies are highly unlikely to add more than two non-roster invitees on the 25-man roster, so a player’s spot on the 40-man roster will come into play.

“It’s going to be difficult to make the final decision because there are guys who are not on the roster that have made a good impression,” Phillies manager Pete Mackanin said.

Andrew Knapp is competing with non-roster invitees Ryan Hanigan and Bryan Holaday to be the backup catcher. Infielder Jesmuel Valentin and non-roster invitees Brock Stassi, Chris Coghlan and Daniel Nava seem to be competing for the final two bench jobs. If Coghlan is not on the Major League roster by Sunday, he must be released upon request or placed on the roster within 48 hours.

If the Phillies did not have Kendrick on the roster, they might be more inclined to take Valentin. Instead, Valentin could play every day at second base in Triple-A Lehigh Valley.

“He can play second, third, first and the outfield,” Mackanin said about Kendrick, whom the Phils acquired from the Dodgers in November. “I like him in the outfield. I am pleasantly surprised [by] the way he looks there. He looks solid there. I don’t want him to feel like he’s going to be a guy that moves around, but if it’s a necessity he can play some second if Cesar [Hernandez] is not swinging [the bat] well and needs a rest and I need to get one of the other outfielders some at-bats.”

Kendrick said he enjoyed his time back at second.

“I had fun out there,” he said. “You just want to stay sharp out there. I’ll take some reps over there, probably not every day because I’m going to play more outfield, but take some ground balls here and there, then on game days if I’m going to play there get in there and turn double plays to be ready to go.”