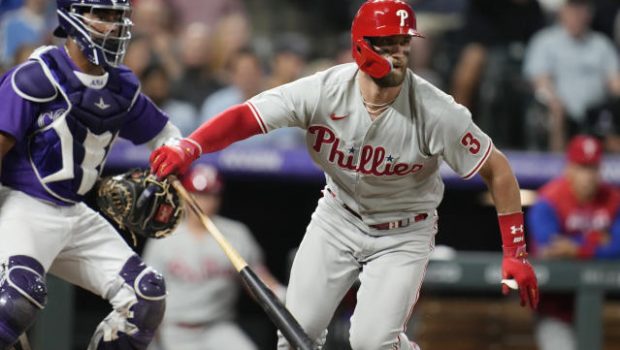 After only games, these new-look Phillies have settled into a familiar place in the standings:

C.J. Cron hit a go-ahead, three-run homer in the seventh inning and the Colorado Rockies beat the visiting Phillies 6-5, who have now lost three straight and are 4-8.

Phillies reliever Seranthony Domínguez (1-1) issued a two-out walk to Charlie Blackmon and gave up a single to Kris Bryant. Cron connected off Jeurys Familia to put the Rockies back in front with his sixth home run of the season.

Kyle Schwarber homered and drove in three runs for the Phillies, and J.T. Realmuto had three hits.

The Phillies took a 2-0 lead on RBI singles by Bryce Harper in the first inning and Matt Vierling in the fourth. Colorado answered in the bottom of the fourth with three runs.Schwarber’s two-run homer in the sixth off Ty Blach — his third of the season — put Philadelphia back ahead.

Kyle Gibson had the one tough inning but was in line for the win after allowing three runs in six innings. The Phillies’ bullpen couldn’t hold the lead.

Schwarber’s RBI single in the eighth got Philadelphia within one.

“He hit a home run the other way and then a base hit for another RBI,” Phillies manager Joe Girardi said. “It’s encouraging.”