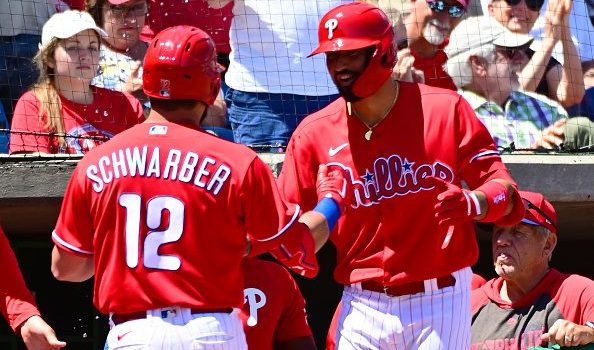 NEW-LOOK PHILLIES HAVE THE POWER TO MAKE IT A RED OCTOBER!

Today’s Phillies season opener at CBP against the Oakland Athletics is the most anticipated in over 10 years, when they last made the playoffs in 2011, for good reason.

With additions of free agents Kyle Schwarber and Nick Castellanos, the team has the firepower in its every-day lineup to compete with big boys in the National League.

MVP Bryce Harper is picking up where he left off last season and more. Ater a hot spring blasting home runs Harper looks primed to get 50 dingers this season. And the added protection around him in the batting order will get him more good pitches to hack at.

The only downer came on the last day in Florida when top pick Mickey Moniak got hit in the hand and suffered a hairline fracture. He’s expected to miss 4-6 weeks of the season. Farmhand from double-A Reading Simon Muzziotti was promoted to the big club yesterday to handle some centerfield time as Moniak heals his injured hand.

But the run production should still stay strong with the new and improved Phillies.