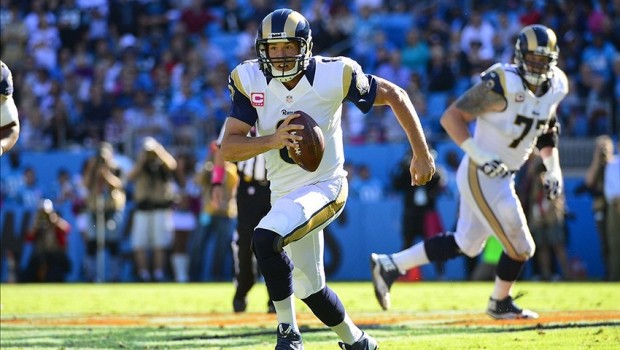 HOW NEW EAGLE QB SAM BRADFORD DEALT WITH HIS INJURIES

The trials and tribulations of new Eagles QB Sam Bradford are well known.

Two ACL surgeries, the latest in 2013, have cost him lots of game experience and tested his resolve to even play in the NFL.

But after Bradford (photo above) was traded by the Rams to the Birds for QB Nick Foles Bradford’s former QB coach at Oklahoma got excited about the possibilities.

After all, running a similar system at Oklahoma to the one Chip Kelly’s running with the Eagles, Bradford completed 69 percent of his passes and threw 86 touchdowns in his final two seasons with the Sooners.

Of course, that’s always been the condition with Bradford.

But Huepel also had a hand in making sure Bradford came back to try, after he considering quitting after tearing his ACL twice in nine months. Bradford had previously admitted such, saying Huepel was key in talking him out of it.

“It was one of those moments where, after all the time and energy and passion that he poured into rehabilitating himself in the first injury, you feel like you’re snakebitten,” Heupel told Mike Sielski of the Inquirer.

“You don’t know when, if, or how your body is going to respond and what your next opportunity is. You’re really just in a lot of limbo. Sometimes, I think, just having a voice from an outside perspective is something that can be valuable.”

Huepel, who is now offensive coordinator at Utah State, said the competitiveness he saw in Bradford in college wasn’t betrayed by the second injury, but underlined. So determined to come back from the first one, the heartache of falling short was temporarily devastating.

“When a player goes through a big letdown, it’s natural to be down,” Heupel said. “I just tried to reach out to him and say, ‘Hey, I still see this in you as a person and a player. I think the best is yet to come for you. You’ve got to get yourself healthy and get yourself back on the field and get yourself in the right environment with the right people and the right supporting cast around you, and there’s no doubt in my mind you’ll achieve the things you’re capable of achieving and want to achieve.’

“Nothing changed for him from a guy who was the number-one overall draft pick as far as who or what he is as a person and a competitor, and ultimately that’s why there’s no doubt in my mind he’s going to reach the pinnacle of success.”

And if — there’s that if again — he can stay healthy, he should be in a place to do just that.