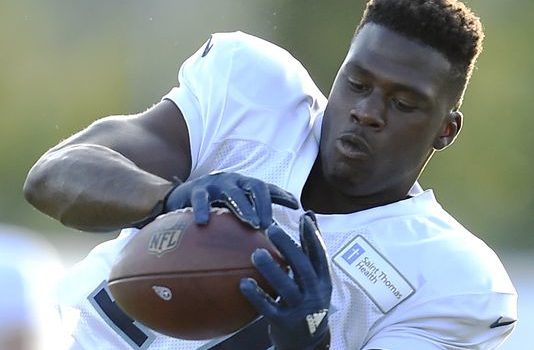 NEW EAGLE DGB WAS A TITANIC TENNESSEE TALENT, PAIN IN THE ASS!

In case you’re wondering how the Eagles were able to snag wide receiver Dorial Green-Beckham from the Tennessee Titans:

His talent was undeniable but he was a giant pain in the ass!

Fed up with his inconsistency and in desperate need of depth along the offensive line, the Titans traded Green-Beckham to the Eagles on today for offensive lineman Dennis Kelly.

Green-Beckham, the Titans’ second-round pick a year ago, was in line for a starting position heading into his second season but struggled with consistency and was passed on the depth chart by fifth-round rookie Tajae Sharpe.

DGB, as he is nicknamed, played in all 16 games with five starts last season, recording 32 catches for 549 yards and four touchdowns. The yardage led all Titans wide receivers. But far more was expected from the 6-foot-5, 237-pound target.

“Not to speak on Philly’s behalf, but they inquired about it,’’ Titans general manager Jon Robinson said, via the team’s website. “They thought it was a good opportunity for him, and we thought adding Dennis would be good for our football team. We are moving on. I appreciate everything Dorial did when he was here. He bought in to what we were trying to do. But in the end we felt like this was the best decision for the team.”

The 6-8, 321-pound Kelly, a fifth-round draft pick out of Purdue in 2012, will provide depth for the Titans. He has played in 30 games, starting 15 — nine at right tackle and three each at right guard and left guard.

“I like his versatility,’’ Robinson said. “He has really good size. He’s versatile. He played a lot of positions. He embodies the traits we look for in an offensive lineman — smart, tough and dependable.”

Green-Beckham, 23, still has plenty of room to develop since becoming the 40th overall pick in 2015. He had 1,278 receiving yards and 17 touchdowns during his first two seasons at Missouri, but off-field incidents led to his dismissal from the team. He was investigated for burglary and assault after allegedly pushing a woman down the stairs, and twice was arrested for marijuana possession — but never charged with a crime. He transferred to Oklahoma but sat out his lone season because of NCAA transfer rules before declaring for the draft. Green-Beckham was ranked the top overall recruit in the nation coming out of high school by Rivals.com.

This is the second trade between the Titans’ first-year GM and the Eagles. Tennessee acquired running back DeMarco Murray for a swap of fourth-round selections in April’s draft.