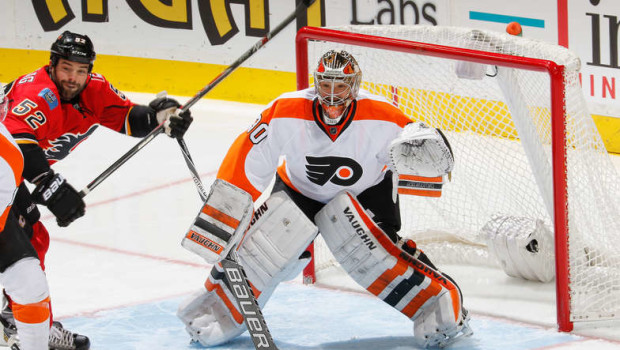 Once again Neuvirth filled in for Steve Mason, who can’t seem to stay healthy enough to stay on the ice, and Neuvirth provided reason for optimism at the end of a long road trip in a so-far trying season for the Flyers.

Neuvirth made 28 saves, Brayden Schenn and Wayne Simmonds scored on the power play and the Flyers beat the Winnipeg Jets 3-0 on Saturday night to end a six-game losing streak.

Neuvirth has three wins this season, all shutouts!

”That’s the way we want to end this road trip,” Neuvirth said. ”It’s been a long 10 days and I thought we were getting better each game. I thought it was a great team effort.”

The Flyers jumped ahead early on Schenn’s score, then Neuvirth backed a 1-0 lead until Philadelphia scored twice more in the third.

”(Neuvirth) played a heck of a game,” Simmonds said. ”I thought we played strong in front of him. We kept it simple and we put a couple in the net tonight.”

Ondrej Pavelec stopped 20 of 22 shots for the Jets. It was the first time this season the Jets were shut out.

Claude Giroux picked up a pair of assists.

Schenn got his fifth goal of the season at 5:54 of the first period. Giroux made a short pass from near the boards to Schenn inside the face-off circle, and Schenn then fired a one-timer past Pavelec. Philadelphia hadn’t scored in its last 16 power-play chances over the past seven games.

Winnipeg outshot the Flyers 12-8 in the opening period.

The second period was scoreless.

Simmonds’ second goal of the season came after some bad luck for Pavelec. The goalie had slid to the left side of the net to stop a shot but tripped, with his stick getting lodged in the top of the net. He moved to the right and stopped Giroux’s shot with his body, but the puck bounced off him and he fell on his stomach. Simmonds then flipped the puck into the net for his second goal of the season at 9:44.

”I didn’t see it,” Pavelec said. ”I just lost the stick and they made some quick plays around the net and it ended up in our net.”

The Jets went on the power play early in the second after captain Andrew Ladd got in a rare fight with R.J. Umberger, who had interfered with Blake Wheeler and sent the team’s leading scorer to the ice.

Wheeler then took a penalty for boarding that had fans loudly chanting their disagreement with the referees.