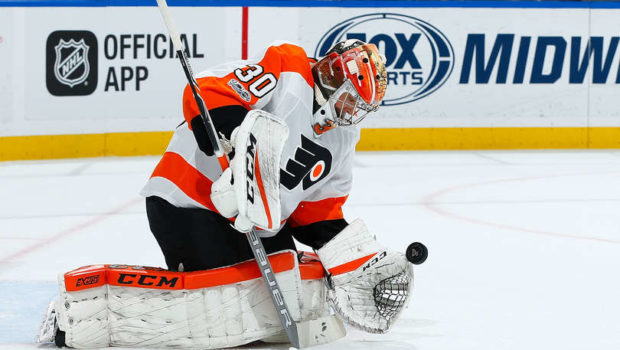 Michal Neuvirth’s 33 saves helped the visiting Flyers to a 2-0 win over the St. Louis Blues, the goalie’s 11th NHL shutout.

Brandon Manning and Claude Giroux scored for the Flyers (7-6-1), who finished a set of back-to-back games after a 3-0 loss at the Chicago Blackhawks on Wednesday.

“I thought [Neuvirth] was excellent and he had to be sharp right from the start of the game,” Flyers coach Dave Hakstol said. “I thought he was a big part of getting everybody settled in. After the first 10 minutes, we were able to push that period back a little in our direction and throughout the game, he was excellent throughout.”

The Flyers came into the game playing rookie defensemen Travis Sanheim, Robert Hagg, Mark Alt and Will O’Neill, who made his NHL debut for injured Radko Gudas.

“Unbelievable,” Neuvirth said. “That’s one of the hottest teams in the league over there. They stepped up when they needed to step up. That’s what they did.”

“Neuvirth played well,” Blues center Brayden Schenn said. “As a team, we weren’t even as close as good as we needed to be. We came out a little bit flat, second period wasn’t that good either. A team playing on a back-to-back, (we) just didn’t really give them enough effort.”

Manning gave the Flyers a 1-0 lead on a wrist shot from the blue line past a screened Allen. The call was officially waved off for goaltender interference on Jakub Voracek, but the Flyers challenged and the call on the ice was reversed after it was determined that Alex Pietrangelo initiated the contact with Voracek.

The Blues outshot the Flyers 10-1 in the first five minutes of the game, but the Flyers recovered and had seven of the final 11 shots of the first period.

“You know they put a lot of pucks (on net) early and I just found my game and guys really stepped up, especially on [the penalty kill],” Neuvirth said. “They blocked so many shots and I had to work really hard to find the puck through the seams. They’re a big team and they gave me a hard time in front of the net.”

Giroux scored an empty-net goal with 5.4 seconds left in the third period.