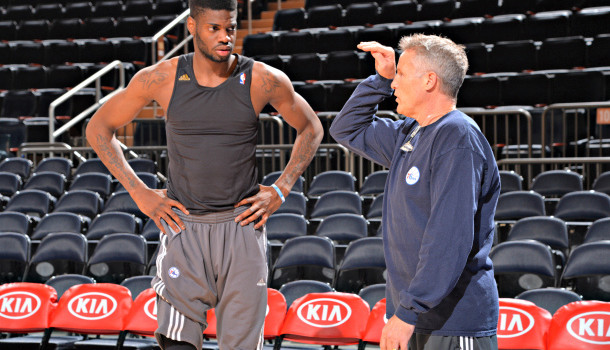 Nerlens Noel, who missed his entire rookie season with the Sixers with a torn left anterior cruciate ligament, says he will make his NBA debut in the Orlando Summer League beginning July 5.

Noel, who was acquired on draft night in June 2013 from the New Orleans Pelicans, has rehabilitated the left knee he injured in February 2013 and said he is now ready to return. Noel was projected as the No. 1 overall pick in the 2013 draft before the knee injury.

“I’ve been 100 percent for months now,” Noel told the Boston Globe. “I feel great and continue to get stronger in all parts of my body, just continuing my growth really. I will be playing in summer games and summer league.”

Noel averaged 10.5 points and 9.5 rebounds in his lone season with Kentucky and is considered an impact defensive player. He said he has been working on his perimeter jumper to improve his offensive prowess.

“It’s beyond words [to play], it’s been a long time coming,” he said. “I feel I’m definitely ready and focused. The whole offseason, I’ve focused on being stronger and working on my skill points, working on my shot, which I have progressed a lot with, working on my technique. Every part of my game I feel I’ve definitely improved on.”