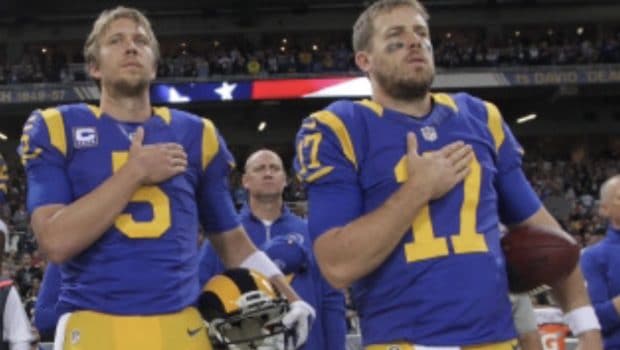 WHO NEEDS A FRANCHISE QB! 3 OF NFL’S FINAL 4 ARE LED BY ALSO-RANS OR NEVER WERES!

It’s officially time to retire the notion that the NFL is a quarterback’s league. It’s never been more clear with Philly’s Nick Foles, Jacksonville’s Blake Bortles and Minnesota’s Case Keenum (above right with Foles when both were Rams) all vying for a spot in the Super Bowl.

At one time, referring to the NFL as a quarterback’s league made sense. Then the quarterback bubble was created when Joe Flacco got hot for a month in 2013, led Baltimore to a Super Bowl and essentially forced them into giving him an $120 million contract. That same bubble officially burst when Derek Carr, who has never started a playoff game, signed a deal last offseason that made him the highest-paid player in NFL history only for Matthew Stafford, owner of zero postseason wins, to break that same record weeks later.

Paying starting quarterbacks has become an all or nothing proposition for teams. If a quarterback is good enough to start, he has to be paid like Aaron Rodgers or he’s leaving (which never happens … outside of Washington). That has driven up the price of quarterbacks so much, we’re at the point where a quarterback as good as Stafford is actually less valuable to a team than a career backup like Keenum or an underachiever like Bortles.

Surrounded with the right talent, quarterbacks like Keenum, Bortles and Foles, can give a team 75% of what Stafford can for a fraction of the cost. Stafford is clearly better than all three, but is a sub-elite quarterback making $25 million a year more valuable than a capable journeyman making less than $10 million? History suggests no.

(Tom Brady has been smart enough to not sign one of these cap-breaking deals. In 2017, he cost the Patriots as much as Mike Glennon cost the Bears. This is why the Patriots always win. They get the best quarterback ever for the price the Raiders should be paying Carr.)

The closest we’ve come to a $20 million quarterback winning it all was Peyton Manning in 2015. He cost $17.5 million against the cap. The Broncos, thanks to a historically great defense, somehow found a way to win in spite of him.

In 2017, the 10 highest-paid quarterbacks combined for two playoff wins. Only three — Brees, Ryan and Newton — even made it to the postseason. This weekend, three $20 million quarterbacks, all of whom are considered top-10 passers, lost to three quarterbacks who aren’t even guaranteed to have starting jobs next season:

The NFL playoffs have proven franchise quarterbacks are overrated

0 thoughts on “WHO NEEDS A FRANCHISE QB! 3 OF NFL’S FINAL 4 ARE LED BY ALSO-RANS OR NEVER WERES!”