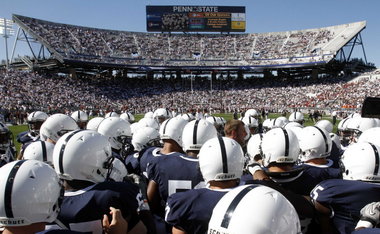 College sports’ governing body also announced it will restore all football scholarships for the 2015-16 year.

“Through the second year of the Consent Decree, Penn State has not wavered in its commitment to fulfilling the requirements of the AIA and to implementing the recommendations made in the Freeh Report,” Senator Mitchell said.

Just after the report was released, the NCAA tweeted that it has immediately restored Penn State’s postseason eligibility.

The report is Mitchell’s second annual review of Penn State’s compliance with an Athletics Integrity Agreement negotiated in the wake of of the 2012 NCAA consent decree.

The agreement outlined a series of steps that Penn State was to take in the name of correcting what the NCAA identified as “culture” problems that, its officials believed, contributed to Sandusky’s ability to commit his crimes.

Mitchell on Monday gave university leaders top grades for making improvements in all regards, including its “wholly new and comprehensive compliance program that places oversight of athletics compliance outside of the Athletics Department and ensures direct access to the University’s senior leadership and Board of Trustees.”

Last year, after a similarly glowing report from the monitor, NCAA leadership announced several weeks later that at Mitchell’s recommendation it would scale back a phased reduction in football scholarships.

Now that Penn State’s postseason eligibility and scholarships have been restored, remaining sanctions include a vacation of more than 100 wins and a $60 million fine that will likely go toward child abuse prevention in Pennsylvania.