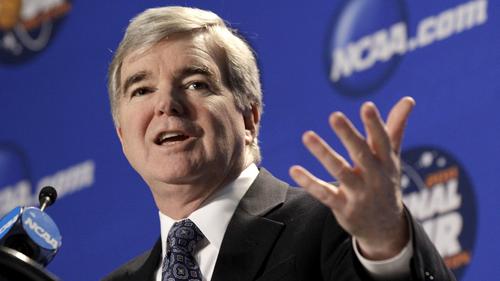 NCAA KNEW ABOUT MICHIGAN STATE SEXUAL ASSAULT ALLEGATIONS IN 2010 — AND DID NOTHING!

NCAA president Mark Emmert (above) was personally told in 2010 of more than three dozen reports of sexual assault committed by Michigan State athletes, but took no apparent action, according to a report in the Athletic.

National Coalition Against Violent Athletes founder Kathy Redmond says she wrote a letter to Emmert—then new to his role leading the NCAA—after meeting with him personally to voice her concerns. Redmond provided a copy of the letter she sent Emmert, which includes the following:

For example, despite recent reports of sexual violence involving two Michigan State University (MSU) basketball players, one of which admitted to raping the victim, neither man was charged criminally or even disciplined by the school. An earlier report of similar violence involving two other MSU basketball players also went un-redressed. In the past two years alone, 37 reports of sexual assault by MSU athletes have been reported, but not one disciplinary sanction was imposed by school officials against any of the men involved.

That 2010 report involved then-freshman Spartans players Keith Appling and Adreian Payne. Redmond implied to The Athletic that Emmert did not follow up with an inquiry because Michigan State president Lou Anna Simon sat on the NCAA board of governors at the time. (In Emmert’s defense, he was busy punishing Ohio State athletes and coaches for getting tattoos at the time.)

Simon resigned Wednesday, and MSU athletic director Mark Hollis resigned this morning just before ESPN’s Outside the Lines report about sexual violence committed by Spartans football and basketball players that resulted in no punishments to the alleged perpetrators. The Appling-Payne case was among the 12 discussed in ESPN’s report.

The NCAA announced Tuesday it would investigate Michigan State.