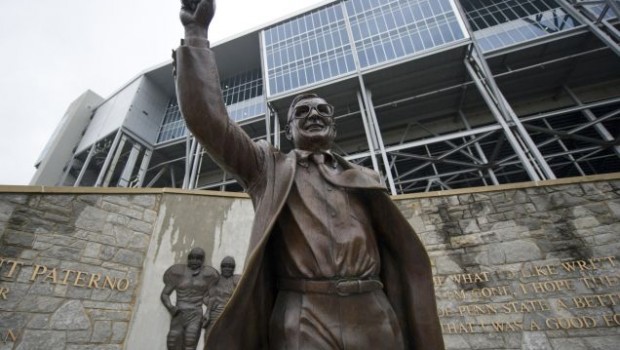 … but when will Penn State restore this statue?

The NCAA massively overreached when it imposed Draconian sanctions on Penn State’s football program three years ago in the wake of the Jerry Sandusky scandal.

Now, the silly organization that allegedly polices college athletics but is more like a legalized version of the Mafia is backtracking quicker than Muhammad Ali did against Joe Frazier on March 8, 1971.

It is doing so because someone told the NCAA that it had screwed up, and also because the likelihood is that it will be out of business pretty soon.

According to a report in today’s Inquirer, the NCAA is considering once again reducing the sanctions against Penn State levied in the wake of the Sandusky scandal. The Inky reports that Penn State, the NCAA, and state officials are negotiating proposals that include restoring the 111 wins taken away from Joe Paterno, as well as ensuring the $60 million fine Penn State has to pay stays “within the state and the university, to be used for child protection.”

If the NCAA does indeed reduce the penalties against Penn State, it will basically complete a process of backtracking on the sanctions that began 16 months ago. In Sept. 2013 the NCAA restored some scholarships to Penn State, and in Sept. 2014 it restored the rest as well as lifted Penn State’s bowl ban. That the main two punishments that have not yet been touched—the $60 million fine and vacating Paterno’s 111 wins—are under consideration for modification signals a near-complete reversal of what were historic sanctions.

Now, if only the bubbleheads in charge at State College would restore the Joe Pa statue, everyone could go home happy.