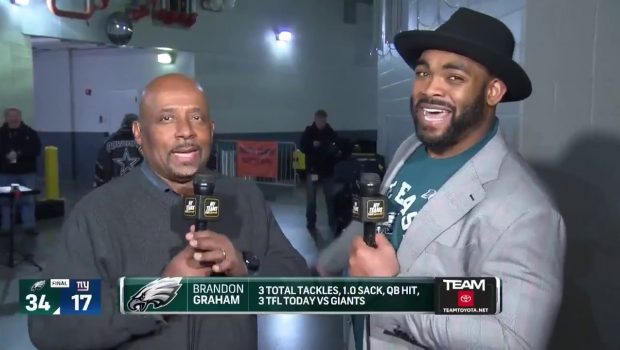 Cheap-ass NBCSP laid off Derrick Gunn in August 2020, and his post-game interviews outside the Eagles’ locker room — specifically with Brandon Graham — have been missed by many Eagles fans.

Ray Didinger retired from both NBC Sports Philadelphia and SportsRadio 94 WIP in May. Seth Joyner announced earlier this week that he won’t return to NBC this season. So there are two chairs open on Eagles Postgame Live in 2022.

Connecting the dots, they may have wanted him back to join the awful Michael Barkann and witless Barrett Brooks.

He wished them well, though

I want to give a shout out to @NBCSPhilly for reaching out to me about returning. Unfortunately things didn’t work out but I wish them well this upcoming football season.