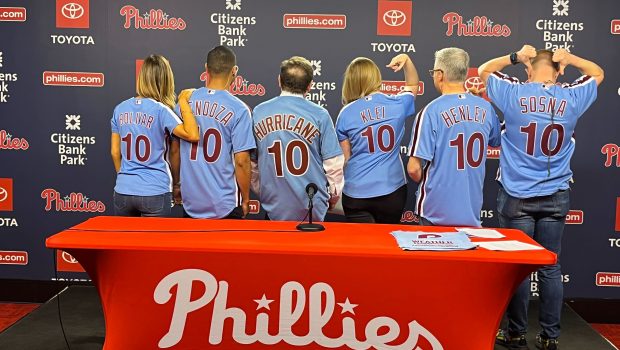 It was another day when Bryce Harper wasn’t in the lineup because of the aftereffects of a PRP injection into his right elbow last Sunday.

And, as usual, the Phils without Harper had no pop in their bats today.

In fact, the Ch.10 weather men and women who came for a pre-game kids event probably could have done better than the Phils against Yu Darvish, who pitched seven shutout innings to lead the San Diego Padres to a 2-0 win.

Darvish (4-1) struck out five, walked none, allowed six hits and continued a run of solid starts. But it was the veteran right-hander’s work in the sixth inning that helped the Padres win the series.

Darvish allowed one-out singles to Rhys Hoskins and Alec Bohm that put runners on the corners with the Padres ahead 2-0. Kyle Schwarber, who entered batting .189, struck out swinging. Nick Castellanos, the cleanup hitter, grounded into an inning-ending forceout.

Bryce Harper lobbied hard for the Phillies to sign Schwarber and they gave the outfielder a $79 million, four-year contract. Castellanos got a $100 million, five-year contract. That’s $179 million on two sluggers that have gone cold as Harper sits out with a sore elbow.

Harper missed a fourth straight game from the lingering effects of platelet-rich plasma injection in his right elbow. The Phillies hope Harper can return Friday against the Los Angeles Dodgers.

The Padres have won each of Darvish’s last six starts since April 17 and he’s 4-0 over that span.

Luis Garcia got two outs in the eighth. The Padres move to bring in lefty Taylor Rogers to face the left-handed Schwarber backfired when he lined a single up the middle. But Rogers got Castellanos to ground into another forceout to end the inning. Rogers worked the ninth for his 15th save.

The Padres and Phillies each won 3-0 games in the first two games of the series and this one also had little offense. Robinson Cano lined an RBI single to right — and nearly took out teammate and baserunner Wil Myers — off Kyle Gibson(3-2) and Ha-Seong Kim added a sacrifice fly for a 2-0 lead in the fourth inning.

Gibson struck out seven, walked none and gave up eight hits in 5 2/3 innings. Every Padres starter had a hit.