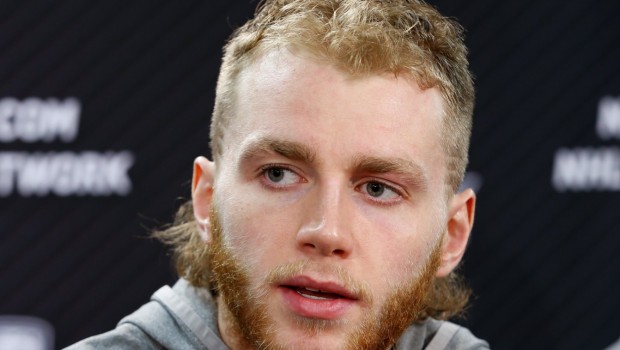 This is what happens when a 50-something American male is put in charge of the network telecasting a sport players by 20-somethings.

And allow said chairman to speak!

NBC Sports chairman Mark Lazarus has some critical words about one of the best traditions in sports. The playoff beard.

The TV executive, who’s been watching the growth of the NHL playoffs across the network — Lightning at Blackhawks tonight at 8 on NBCSN — really wishes playoff beards weren’t such a huge thing.

“The players won’t like this, but I wish they all would stop growing beards in the postseason,” Lazarus told the Chicago Tribune. “Let’s get their faces out there. Let’s talk about how young and attractive they are.”

A lot of women think players are more attractive with a bit of facial hair. This is the first year that Patrick Kane’s beard (above) isn’t a total embarrassment. It’s a good look on him.

Lazarus is correct that the NHL playoffs are filled with young, attractive hockey players. But, aside from their beards, their faces are also largely covered up with helmets and visors, making it almost impossible to identify who’s who on the ice. That’s part of the reason the guys have their last names written in big letters across their jerseys.

Beards are hardly the issue here, even though he says they hurt player marketability.

“I know it’s a tradition and superstition, but I think (the beards do) hurt recognition. They have a great opportunity with more endorsements.”

To mess with the playoff beard is to mess with what makes the playoffs so glorious. Playoffs are about grit and pushing your body to exhaustion, ignoring everything, including facial hair, for the pursuit of one goal.

Maybe NBC can take a cue from how Chicago has embraced Patrick Kane’s ridiculous mullet. It’s not even just hair anymore, it’s a symbol. Instead of fighting the beards, NBC just needs to learn how to market them.

According to the Tribune, Lazarus has actively pleaded with the NHL to get players to shave, but so far, no one is really listening.