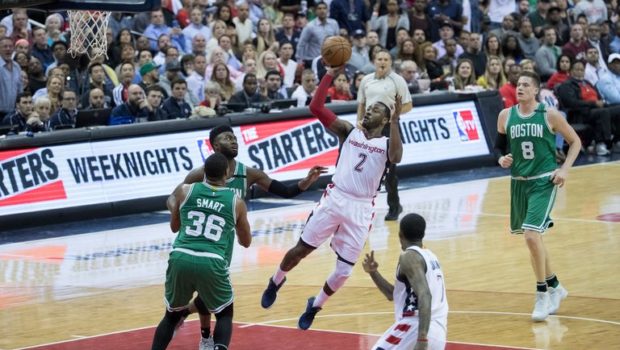 John Wall (above) scored 24 points, Isaiah Thomas was held to 13 and the Washington Wizards jumped out to a hot start for a 116-89 victory over the Boston Celtics in a technical foul-filled Game 3. The win cut the Wizards’ deficit in the series 2-1.

The Wizards jumped out to a 22-0 first-quarter run to take a 34-12 lead as Thomas and the Celtics kept missing shots and turning the ball over. The game was already a blowout in the second when Washington’s Kelly Oubre Jr. was ejected for charging and knocking over Kelly Olynyk after Olynyk was called for an illegal screen.

There were eight technical fouls and three ejections total.

“I guess that’s playoff basketball,” said Thomas, who was rendered relatively ineffective after scoring 53 in Game 2. “We don’t like them and they don’t like us.”

Otto Porter and Bojan Bogdanovic scored 19 points apiece for Washington, which improved to 4-0 at home in the playoffs. Washington’s 119 first-quarter points was an N.B.A. record for the first three games of a series.

Draymond Green knocked down five 3-pointers and scored 21 points before a brief knee scare late in the Golden State Warriors’ 115-104 victory over the Utah Jazz for a 2-0 lead in the Western Conference semifinals.