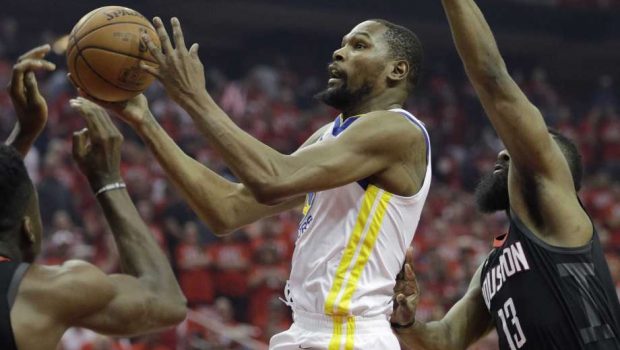 So much for the home court advantage in the NBA playoffs.

Kevin Durant (above) scored 37 points and Klay Thompson added 28 to lead the Golden State Warriors to a 119-106 win over the Houston Rockets in Game 1 of the Western Conference finals.

Starting a playoff series on the road for the first time since 2014, the Warriors trailed by as many as 9 early, but had evened it up by halftime and used a big run at the beginning of the fourth quarter to pull away.

Game 2 is tomorrow night in Houston.

James Harden scored 41 to lead the Rockets, who lost at home for the second time this postseason. Steph Curry added 18 for the Warriors, who are in the conference finals for a franchise-record fourth straight time. It’s Houston’s first trip since 2015 when Golden State won the series in five games.

The Warriors, who are the second seed in the West, opened a playoff series away from Oracle Arena for the first time since 2014 when they lost to the Los Angeles Clippers 4-3 in the opening round.

Houston struggled to slow down Durant all night, and things got even worse when Trevor Ariza picked up his fifth foul with about 10 minutes left in the third with Golden State up by 3. Durant made two baskets for the Warriors around one by Chris Paul that left the Warriors up 73-68 a couple of minutes later.

Gordon added a layup for Houston after that, but Golden State scored the next six points, with a 3-pointer from Thompson, to make it 79-70 with about 4 1/2 minutes left in the third.

The Rockets rediscovered their offense after that, scoring the next eight points, powered by 3s from Gordon and Gerald Green, to get within 85-80 with about a minute left in the quarter.

Durant added two free throws to close out the quarter and leave the Warriors up 87-80 entering the fourth.