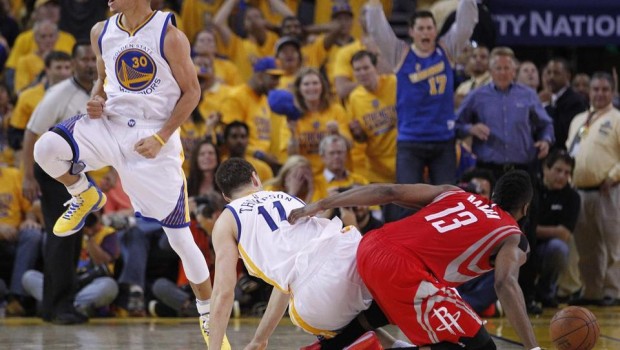 James Harden had Game 2 on his fingertips – and then he didn’t (above).

Now the Golden State Warriors have the Western Conference finals in their grasp.

Stephen Curry scored 33 points before Harden lost the ball in the closing seconds to end a spectacular duel between the NBA MVP and runner-up, and the Warriors held off the Houston Rockets 99-98 on Thursday night to take a 2-0 lead in the series.

Harden rallied the Rockets from 17 points down in the second quarter and had a chance to finish off the comeback in the fourth. Instead, Klay Thompson and Curry trapped Harden, who lost the ball as time expired.

Harden fell to the floor and put his hands over his head as the Warriors celebrated on the court, the sellout crowd of 19,596 roared, and golden-yellow confetti fell from the rafters.