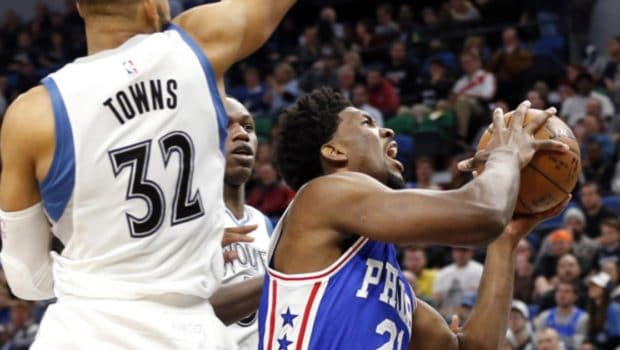 AS NFL RATINGS ERODE, NBA TV NUMBERS ARE THROUGH THE ROOF!

In case you hadn’t noticed, NFL TV ratings have slipped considerably and the NBA is off to its second-most-watched season ever.

ESPN, which has telecast 30 games since the season’s Oct. 17 opener and features the Sixers-Knicks on Christmas Day, says that average viewership has soared 18 percent, to 1.8 million a game, from this point last year.

The averages, taken collectively, make for the hottest start since the 2010-11 season — the year LeBron James abandoned the Cleveland Cavaliers for the Miami Heat.

Central to the NBA’s rise is its success in focusing the league’s many dramas on the game itself — an area where the NFL has failed miserably, experts say.

Given all the cord-cutting in the intervening years, not to mention the indifference of millennials to traditional TV, the NBA is clearly doing more than a few things right.

Experts point to last season’s rousing finale — a five-game face-off between the Golden State Warriors and the Cleveland Cavaliers — which gave the NBA its best ratings since Michael Jordan quit the game in 1998.

The league followed its early-June finals with the “2017 NBA Draft” on June 22 at Brooklyn’s Barclays Center.

ESPN’s telecast of the event drew 15 percent more viewers than the previous year’s version, making it the second-most-watched NBA draft on record.

In July, the NBA’s expanded Summer League started introducing drafted players to a broadening fan base.

ESPN telecast 25 of the summer games, generating an average viewership of 437,000 — up 51 percent from the previous summer.