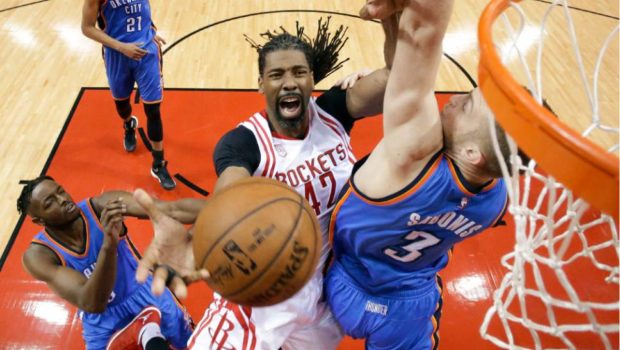 Westbrook set a franchise playoff scoring record and added 13 assists and 10 rebounds. It was the sixth career playoff triple-double for Westbrook, who had an N.B.A.-record 42 in the regular season.

But Westbrook shot just 4 for 18 in the fourth quarter as the Rockets rallied from a deficit that reached 15 points.

The Rockets benefited from a balanced scoring attack, with Lou Williams scoring 21 points and Eric Gordon adding 22 off the bench. Patrick Beverley had 15.

The Thunder led by 3 entering the fourth quarter and scored the first 5 points of the period to make the score 94-86. But Oklahoma City then went more than three minutes without scoring, allowing Houston to take the lead.

WIZARDS 109, HAWKS 101 In a rough, foul-filled game, Bradley Beal had 16 of his 31 points in the fourth quarter, including a key late 3-pointer, to help Washington beat visiting Atlanta and take a 2-0 lead in their first-round series.

John Wall finished with 32 points and 9 assists, including the pass to Beal for his shot from beyond the arc with 38 seconds remaining that sealed the win for the Wizards.

Paul Millsap led the Hawks with 27 points — including 14 in the third quarter — and 10 rebounds, and Dennis Schroder added 23.

After Washington won the series opener, Millsap bemoaned the physicality of the game, saying: “The difference in the game is we were playing basketball and they were playing M.M.A.”

Game 3 is Saturday in Atlanta.

JaVale McGee shined on a night none of the usual stars found their steady shooting strokes and sparked Golden State off the bench with 15 points, and the Warriors beat the Portland Trail Blazers 110-81 in Game 2 of their first-round playoff series.