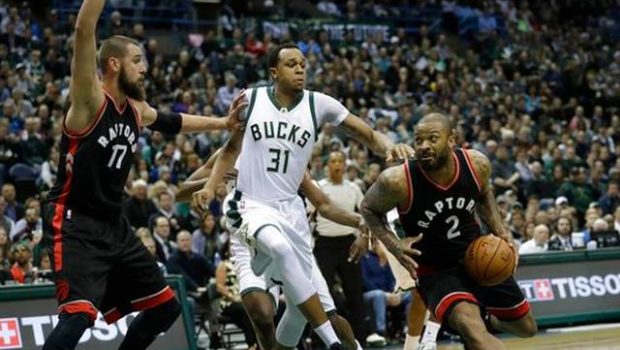 DeMar DeRozan scored 32 points and the Toronto Raptors squandered a 25-point lead late in the third quarter before holding on for a 92-89 victory over the host Milwaukee Bucks and winning their first-round playoff series in six games.

Cory Joseph had five points in a 9-0 run in the final two minutes, including a 3-pointer with 1 minute 27 seconds left, to help stave off the pesky Bucks.

The Raptors move on to face the Cleveland Cavaliers in the Eastern Conference semifinals in a series that starts Monday.

Jason Terry’s 3-pointer with 3:06 left gave the Bucks an 80-78 lead, completing an unlikely comeback from the 25-point deficit with 5:16 left in the third quarter. The Raptors looked like as if they were on cruise control after DeMarre Carroll’s 3 gave them the 71-46 advantage.

Giannis Antetokounmpo spearheaded the second-half rally for Milwaukee, finishing with 34 points. He went 13 for 23 from the field but was 2 for 6 in the fourth.

SPURS ADVANCE Kawhi Leonard scored 29 points, and the San Antonio Spurs advanced to the Western Conference semifinals by beating the Memphis Grizzlies, 103-96, in Nashville to take the series, 4-2.

The Spurs now have beaten Memphis in four of the five playoff series between these teams, and this was San Antonio’s second straight win over the Grizzlies in the first round.

Tony Parker added 27 points on 11-of-14 shooting, while LaMarcus Aldridge had 17 points and 12 rebounds.

The Spurs’ semifinal series with Houston will start Monday night in San Antonio.