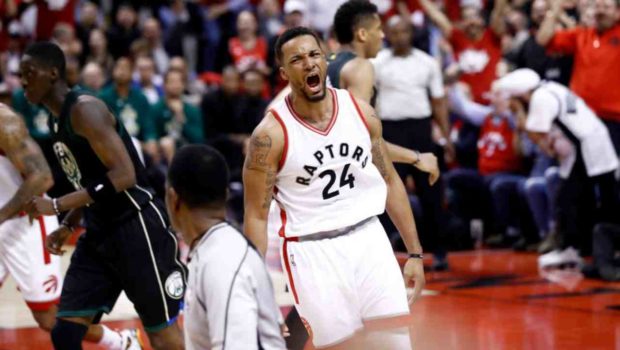 Norm Powell scored 25 points, a career playoff high, Kyle Lowry had 16 points and 10 assists, and the host Toronto Raptors beat the Milwaukee Bucks, 118-93, in Game 5 of their first-round playoff series.

Serge Ibaka scored 19 points and DeMar DeRozan 18 for Toronto, which can advance to face the Cleveland Cavaliers, the defending NBA champions, in the second round with a victory in Game 6 on Thursday night in Milwaukee.

“We’ve got to treat it like Game 7, period,” DeRozan said. “We can’t be happy with these last two games. We’ve just got to treat this next game like it’s Game 7.”

Many in the sellout crowd announced at 20,251 rose to their feet and chanted “Raps in six!” during the final minute of the game.

“If we want to continue to play, if we want to push it to a Game 7, we’ve got to win at home,” the Bucks rookie point guard Malcolm Brogdon said. “If we don’t come out and give the energy that we need to, then we’ll lose and we’ll be done.”

Pressed into action after Milwaukee routed Toronto, 104-77, in Game 3, Powell delivered a much-needed jolt of energy and athleticism as the Raptors ground out a victory in Game 4.

HAWKS 111, WIZARDS 101 Paul Millsap bounced back from a sluggish start to score 19 points, Dwight Howard had his best game of the postseason, and Atlanta pulled away from visiting Washington to even their opening-round playoff series at 2-2.

Howard, who was not a factor in the first three games, had a double-double by halftime and finished with 16 points and 15 rebounds. The Hawks had seven players score in double figures, including big contributions off the bench from Kent Bazemore and Jose Calderon.

Bradley Beal scored 32 points for the Wizards, bouncing back from a dismal performance in Game 3, and John Wall had another sterling performance, with 22 points and 10 assists. But Beal and Wall could not match Atlanta’s more balanced effort.

Now a series marked by ill feelings that went so far as Markieff Morris calling Millsap “a crybaby” is down to a best-of-three. Game 5 is Wednesday night in Washington.

Stephen Curry scored 37 points and Golden State beat the Blazers 128-103 to advance to the conference semifinals. The Warriors will face the winner of the series between the Utah Jazz and the Los Angeles Clippers, which is tied at 2.

Golden State was energized despite playing for the second straight game without coach Steve Kerr, who has been experiencing a flare-up of symptoms stemming from back surgery a couple of years ago. Assistant Mike Brown has served as head coach in Kerr’s absence.