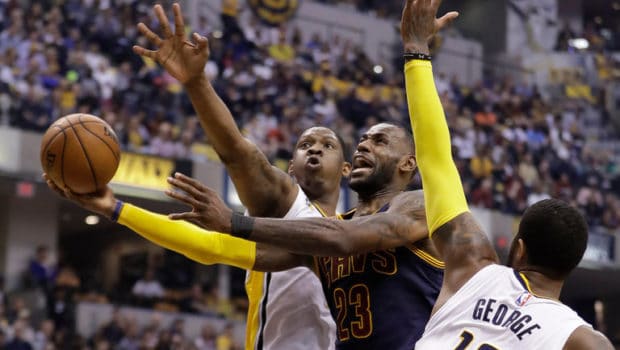 Playoff LeBron is back.

The Cavaliers may have had ups and downs during the regular season, but they began the playoffs with a four-game first-round sweep of the Pacers that they completed yesterday with a 106-102 victory.

Playoff LeBron James collected 33 points, 10 rebounds and 4 assists, shouldering the offense by attempting 25 shots, most of them layups. He affixed himself to the Pacers star Paul George, limiting him to 15 points. And he made the big shot, a 3-pointer over Pacers center Myles Turner with just over a minute left.

James, trying to create space against Turner, waited — waited for Turner to give him an opening. Once Turner dropped his hands, James had it.

“Trusted my mechanics, trusted what I’m doing,” said James, who, after the game, wore a sweatshirt with flames on the sleeves. “It went down.”

The Cavaliers, the second seed in the Eastern Conference, bought themselves some time before they face either the Toronto Raptors or the Milwaukee Bucks in a conference semifinal. Those teams are tied at two games apiece in their first-round series — and it is worth emphasizing that this is typical. These series are generally grinds.

The Boston Celtics, the top seed in the East, lost the first two games of their series against the Chicago Bulls. The San Antonio Spurs, who finished the regular season with the second-best record in the league, are knotted at two games apiece with the Memphis Grizzlies out West. Even the Warriors, who are one win from sweeping the Portland Trail Blazers, are coping with adversity — their coach, Steve Kerr, is dealing with chronic back problems. Kerr told reporters on Sunday that he could miss the rest of the playoffs.

James, meanwhile, has developed a habit of treating the first round like an appetizer before he digs into a playoff buffet. His teams have not lost a first-round series in 12 career playoff appearances. And his teams have won 21 straight first-round games dating to 2012.

Nene scored 28 points on perfect shooting from the field, and the Rockets beat the Oklahoma City Thunder 113-109 to take a 3-1 lead in their first-round playoff series.

Isaiah Thomas scored 33 points, and the Celtics beat the Bulls 104-95 to tie their first-round playoff series at 2-all.

Joe Johnson scored 28 points, and the Jazz beat the Clippers 105-98 to tie their first-round playoff series at 2-all. It was Utah’s first home playoff win since 2010.