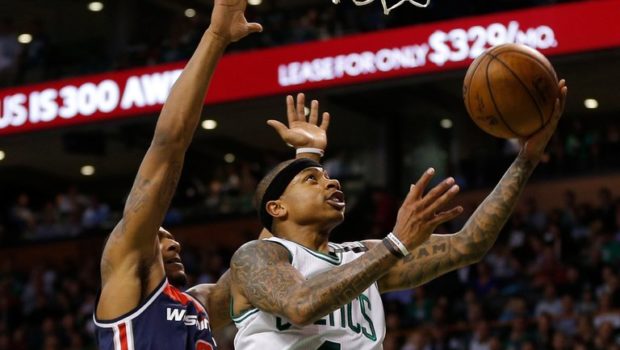 Isaiah Thomas scored 53 points — 9 in overtime — as the Boston Celtics beat the visiting Washington Wizards, 129-119, to take a 2-0 lead in the best-of-seven Eastern Conference semifinals.

Fiddling with the mouth guard he began using after he lost one of his front teeth in Game 1, Thomas became the fifth player in the history of the Celtics to score at least 50 points in a postseason game.

John Wall had 40 points and 13 rebounds for the Wizards.

The series moves to Washington for Games 3 and 4, set for Thursday and Sunday.

Stephen Curry scored 22 points in three quarters and the top-seeded Golden State Warriors warmed up in a hurry after a weeklong layoff between playoff games, beating the Utah Jazz 106-94 in the opener of the Western Conference semifinals.

Kevin Durant added 17 points on an uncharacteristically cold shooting night at 7 for 17 and had five rebounds and five assists. He missed the middle two games against Portland because of a strained left calf then returned for 20 minutes in Game 4. Zaza Pachulia scored 10 points in 14 minutes.