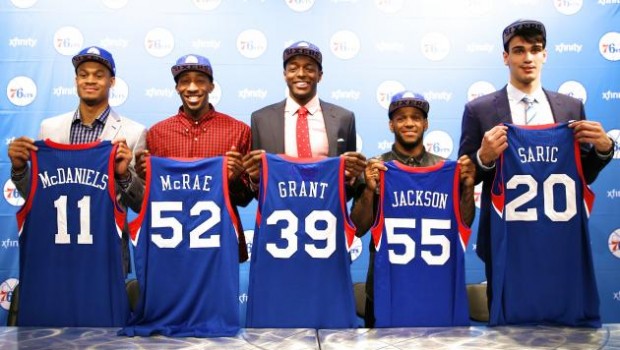 NBA OWNERS TO SIXERS: TANKS FOR THE MEMORIES

For the Sixers, who have played by the rules, this is the week they have feared for months.

The NBA owners, meeting in New York, are about to change the rules by which teams are incentivized to lose in order to get high draft picks in order to rebuild. It is a strategy the Sixers have used to land center Joel Embiid in the June draft.

But because the idea of “tanking” — or bottoming out in order to eventually get better — carries such a negative image, the league is considering significant changes to the lottery system. Among the changes being discussed: teams with the four-worst records have an equal shot at the No. 1 pick. Also, the team with worst record could drop to the seventh pick in a worst-case scenario.

“Their plan is ‘We’re stuck in the middle here. … We don’t want to be stuck here. We want to accumulate all the assets we possibly can,’ ” Thorn said. “They knew they weren’t going to be very good but as quickly as they can, they want to get back to the point where they can compete for the big prize.”

VanDeWeghe added: “It’s certainly not up to us to tell them how to run their business.”

But the NBA might just force the Sixers to change the way they do business. Philly might have a legitimate complaint, too, if a new draft lottery process is adopted starting in 2015. The Sixers embarked on a plan and now the league could abruptly change the rules. Introducing the change in 2016 or 2017 would at least give teams the opportunity to plan for a new system.