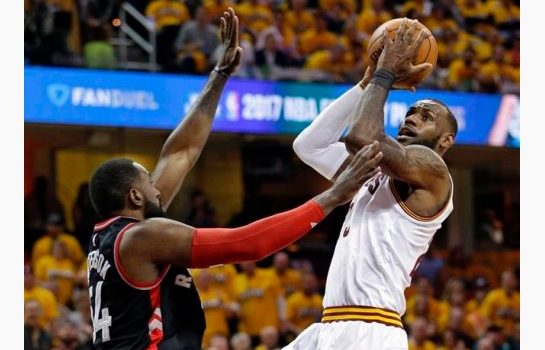 LeBron James (above) scored 35 points, Kyrie Irving added 24, and the Cleveland Cavaliers blew out the visiting Toronto Raptors, 116-105, in the opener of their Eastern Conference semifinal series.

The Cavaliers had not played since April 23, when they completed a four-game sweep of the Indiana Pacers. But Cleveland, the defending champions, did not show signs of rust and was well prepared to face the Raptors, who lost to the Cavaliers in last year’s conference finals in six games.

Toronto dropped to 1-12 in playoff openers, and the Raptors were blown out for the fourth straight time in Cleveland.

“As a team, I think we had great energy,” James said, “and even some of the mistakes that we had we were able to cover up for because our energy level was high. But we’ll be a lot better on Wednesday.”

Game 2 is Wednesday night in Cleveland.

“Just taking what the defense gives us,” Harden said. “Last series (against Oklahoma City) was a more grind-it-out. We weren’t really making a lot of 3s. We had to figure a way to get paint points and in this series so far they gave opportunities to shoot 3s.”

The Rockets were 22 for 50 behind the arc, the most 3s attempted and made against the Spurs in their long postseason history.

Houston had six players in double figures, including 20 points and 13 rebounds from Clint Capela.

“They came out ready, they outplayed us tonight,” said Spurs forward LaMarcus Aldridge, who was held to four points. “They made most of their shots. Guys competed, but I thought we made mistakes early. They took advantage of it. Once they had offensive rhythm they were rolling. And we never really found ours.”

Game 2 is Wednesday in San Antonio.