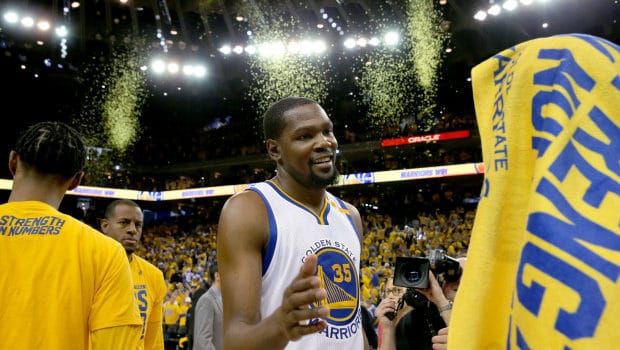 Kevin Durant (above) had two free throws, a layup and a drive and slam on slow-footed Kyle Anderson, Leonard’s replacement, who had little chance to slow Durant.

Midway through the third quarter, the Spurs’ Kawhi Leonard took a step-back, high-rising corner fadeaway that won’t even register in the stat sheet because he was fouled.

The Warriors immediately rattled off an 18-0 run and, over the next 20 minutes, outscored the Spurs by 25 points to rumble back for a wild 113-111 Game 1 win in Oracle.

Until Leonard’s injury, the Spurs had complete control. They jumped on the Warriors, making the easy passes difficult, turning the difficult passes into turnovers and holding one of the best offenses in league history to 16 first quarter points, while turning them over eight times and bolting up by as many as 25 in the first half.

Draymond Green made some strange, critical first half passes and mistakes. Klay Thompson was held to six points for the entire game. The Warriors were outscored by 19 in Andre Iguodala’s 10 minutes before Mike Brown rested him the entire second half because “he looked hobbled” (the Warriors later called it a left knee soreness).

The Warriors trailed by 20 at halftime, when Steve Kerr gave the team an impassioned speech. Out of the break, they scored on the first four possessions. But the Spurs kept planting backbreaking jumpers. Four minutes into the third quarter, the lead had actually grown from 20 to 21.

The Kerr-driven halftime energy boost had been countered. Pau Gasol stole a Steph Curry pass with 8:17 left in the third quarter, the 12th of their 17 turnovers. Leonard maneuvered his way to the deep left corner with 7:54 left in the third, creating space for a jumper after getting Pachulia on a switch.

The play led to free throws, which put the Spurs up 23. But the foul also reinjured an ankle that had already been bothering Leonard. He originally twisted in late in Game 5 of the last series, missed the closeout Game 6 in Houston and returned on Sunday afternoon looking more than fine.

Leonard had 26 points in his 23 minutes. But on a similar shot in the corner moments before the Pachulia foul, Leonard twisted his ankle on teammate David Lee, who was on the Spurs bench. He asked out of the game, then returned again, only to twist it worse on Pachulia’s foot, knocking him out for the rest of Game 1 and maybe beyond.

Slow-motion video of the play surfaced online soon after. Pachulia came under heat from some, with some saying it was reckless and wondering whether it was on purpose.

“Did he step under it, like on purpose?” Leonard said. “No, he was contesting the shot, the shot clock was coming down.”

“I did my part to challenge the shot,” Pachulia said. “It was a hand-off situation. My teammate was behind the screen. That’s what I did, turned around for the rebound and that was it. I hate that anybody going down like that with injury. I’m an athlete, too. I know how it feels. Wish nothing serious for him because we are colleagues.”

Regardless of how it happened, it happened. And suddenly the Spurs, already without starting point guard Tony Parker for the rest of the season, were without their MVP candidate, who, to that point, was the best player on the floor.

The Warriors pounced at the opportunity. Well, primarily, Steph Curry and Kevin Durant pounced. In the ensuing 18-0 run, which lit Oracle Arena up like nothing else this season, Curry hit a huge 3 and a 22-footer with his big toe on the line. Durant had two free throws, a layup and a drive and slam on slow-footed Kyle Anderson, Leonard’s replacement, who had little chance to slow Durant.

The Spurs stabilized a bit late in the third, but could only hold off the next avalanche for so long. Over the game’s final 20 minutes, Durant scored 20 of his 34 points, including a weaving fourth quarter layup that gave the Warriors their first lead since early in the game, and Curry scored 15 of his game-high 40, including a floater in the final minute that served as the game-sealing hoop.

The MVP duo combined for 74 of the team’s 113 points, shouldering the load for a 25-point comeback win that turned a still-impressive Spurs Game 1 performance into a gut-punch loss, leaving them down 1-0 in the series and unsure of the status of their star forward.