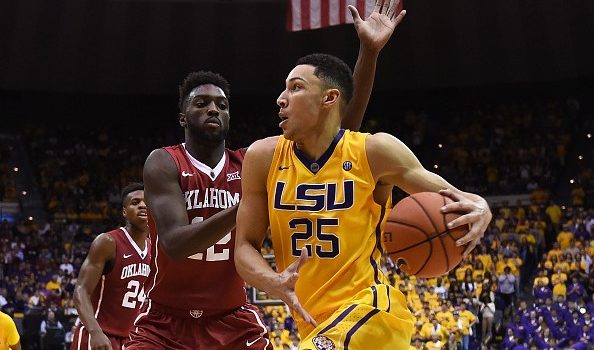 My, how times have changed in the NBA draft.

Tonight’s annual selection show on ESPN at 7 pm will result in the Sixers taking Ben Simmons of LSU.

He would be the first person in college basketball’s one-and-done era to be selected with the top pick despite not playing in the NCAA tournament.

But here’s the strange thing about this year’s NBA draft: The top prospects who actually played in the NCAA tournament didn’t fare much better. In fact, the projected lottery picks in DraftExpress’s mock draft as of last night will enter the NBA with less postseason success in their most recent season of college basketball than any other group of lottery picks in the last decade.

They won a total of 12 combined games in this year’s NCAA tournament—which was by far the worst showing since 2006. Of the 14 potential lottery picks, 12 played college basketball, but only Oklahoma guard Buddy Hield made it past the Sweet 16. Unless most predictions turn out to be wildly inaccurate.

A look back at the 10 drafts of the one-and-done era reveals how unusual this year’s class is. Lottery picks usually win at least 25 games in the NCAA tournament. Last year’s won 37 because it was lousy with players from Duke and Kentucky. The last time the lottery had such little postseason experience was in 2013—and that notoriously weak draft was the first that didn’t send a single player to the All-Star Game in the next three seasons.

But it’s not always the worst idea to take someone who didn’t play well, if at all, in the NCAA tournament. With the first pick in the 2007 draft, the Portland Trail Blazers selected Ohio State center Greg Oden, who played for the national title as a freshman. That left the Seattle SuperSonics with someone with only one NCAA tournament win. It seemed to work out for them: That guy’s name was Kevin Durant.