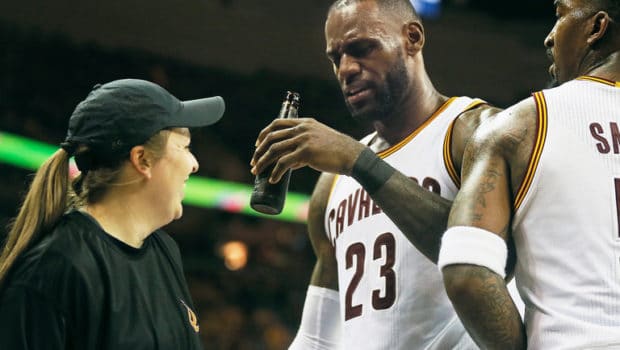 LeBron James scored 39 points and pushed the host Cleveland Cavaliers to a 125-103 victory over the Toronto Raptors in Game 2 of their Eastern Conference semifinal series.

Just like a year ago in the conference finals, the Cavaliers are up, 2-0, on the Raptors, who were blown out for the fifth straight time in Cleveland in the playoffs, losing the games by an average of 24.2 points. Game 3 is Friday night at Air Canada Centre.

James needed 25 points to pass Kareem Abdul-Jabbar, who was second with 5,762, and overtook him with a 3-pointer in the third quarter, during which he scored 17 as the Cavaliers opened a 26-point lead. James, who finished 10 of 14 from the field, trails only Michael Jordan (5,987).

Kyrie Irving had 22 points and 11 assists, and Channing Frye scored 18 points for the Cavaliers, the defending champions, who are 9-0 in the playoffs since losing Game 4 of last year’s N.B.A. finals.

Get the big sports news, highlights and analysis from Times journalists, with distinctive takes on games and some behind-the-scenes surprises, delivered to your inbox every week.

SPURS WIN BUT LOSE PARKER Kawhi Leonard had 34 points, 8 assists and 7 rebounds, and the San Antonio Spurs overcame the loss of Tony Parker to beat the visiting Houston Rockets, 121-96, and even their Western Conference semifinal series at one game apiece.

Parker did not return after hurting his left leg with 8 minutes 43 seconds remaining in the game. Spurs officials said Parker would have a magnetic resonance imaging test on Thursday morning, but Coach Gregg Popovich said after the game that “it’s not good.”

Parker, who finished with 18 points and 4 assists in 26 minutes, fell to the court after missing an uncontested short jumper. He grabbed his left knee immediately upon landing and remained on the court for a few minutes. He tried to walk but had to be carried by teammates.

Houston guard James Harden was limited to 13 points while shooting 3 for 17 from the field.

The start was as frenetic as Game 1, but the Spurs kept pace this time. The teams shot a combined 15 for 25 in the opening six minutes, including 5 for 9 on 3-point attempts.

Popovich started Pau Gasol in place of David Lee to give the Spurs another shooter in the starting lineup, and it paid off early. San Antonio shot 62 percent in the opening quarter.

The Spurs finished at 54 percent, and LaMarcus Aldridge had 15 points after being held to 4 in the opener.