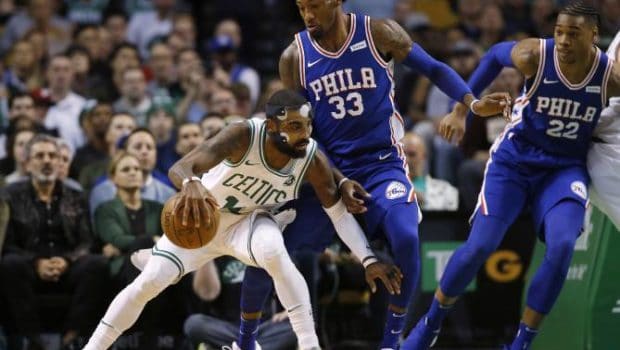 Kyrie Irving scored 36 points and the Celtics held off the short-handed Sixers 108-97 to improve the NBA’s best record to 19-4.

It was Irving’s fifth game this season with 30 or more points. Al Horford added 21 points and eight rebounds, and Marcus Morris had 17 points as the Celtics bounced back from Monday night’s home loss to Detroit with their ninth victory in 11 games.

“It’s go time, man,” Irving said of his mindset in the fourth quarter. “Especially when the game is in the balance. It’s the best time to play. It’s just ultimate freedom.”

Boston led by five at the end of the third quarter but started the fourth by connecting on seven of its first 11 shots to increase the margin to 95-82. Irving had nine points in the final 12 minutes.

“It’s a luxury. Not a lot of teams have that,” Horford said of Irving’s ability to take over games. “His will to win and make those shots when we need them most — it just keeps impressing me game by game.”

Dario Saric led the Sixers with 18 points. JJ Redick finished with 17 and Ben Simmons had 15.

“Kyrie is obviously amazing,” Redick said. “Horford doesn’t get enough credit for how good he is offensively. As good as Kyrie is, Horford is the hub of everything they do.”

It was the third game in four nights for the 76ers, who have lost two of three. Saturday’s game against Detroit will conclude a week featuring matchups with the East’s three top teams.

The Sixers played without center Joel Embiid, who continues to rest on the second night of back-to-backs.

With Embiid out, Celtics coach Brad Stevens went with a bigger lineup, starting Aron Baynes in place of Morris.

Philadelphia was able to keep the game tight by knocking down 16 3-pointers.