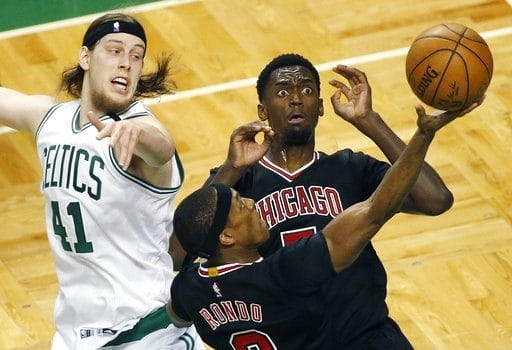 Jimmy Butler had 30 points and 9 rebounds as the Chicago Bulls outlasted host the Boston Celtics, 106-102, in the first game of their Eastern Conference series.

Isaiah Thomas, playing a day after his 22-year-old sister was killed in a car accident, led top-seeded Boston with 33 points. But the Celtics could not overcome a strong second half from Butler, who led eighth-seeded Chicago to a victory in the first game of the best-of-seven series.

Butler had 23 points after halftime, including 10 straight points early in the fourth quarter.

Al Horford had 19 points, 8 assists and 7 rebounds for Boston. Bobby Portis added 19 for the Bulls.

Game 2 is tomorrow night in Boston.

WARRIORS 121, BLAZERS 109 Kevin Durant had 32 points and 10 rebounds in his Golden State playoff debut, Stephen Curry scored 29 points, and the host Warriors withstood a sensational day by Portland’s C. J. McCollum and Damian Lillard to beat the Trail Blazers in Game 1 of their series.

McCollum scored 41 points, the most in his playoff career, and Lillard had 34. Golden State’s Draymond Green had 19 points, 12 rebounds, 9 assists and 5 blocked shots.