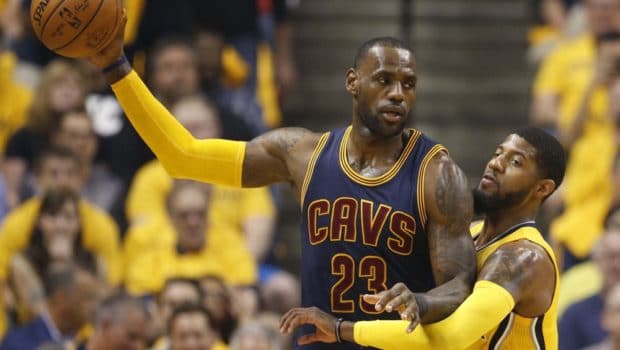 LeBron James had a triple-double and the Cleveland Cavaliers set a postseason record by erasing a 25-point halftime deficit to beat the Indiana Pacers, 119-114, last night and take a 3-0 lead in a first-round series.

The incredible rally ruined a big night for Paul George, who had 36 points, a playoff career-high 15 rebounds and 9 assists for the Pacers.

Cleveland trailed by 74-49 at halftime. The largest halftime deficit overcome to win a playoff game had been 21 points by Baltimore against Philadelphia in 1948.

The Cavaliers will try to sweep the series on Sunday.

BUCKS ROUT RAPTORS: Khris Middleton scored 20 points, and the host Milwaukee Bucks overwhelmed the Toronto Raptors, 104-77, to take a two-games-to-one lead in their first-round series. Giannis Antetokounmpo had 19 points and 8 rebounds, and Greg Monroe added 16 points for the Bucks, who built a 20-point lead in the first quarter.

Mike Conley had 24 points and eight assists, helping the Grizzlies snap a 10-game postseason skid against the San Antonio Spurs with a 105-94 victory. Faced with the possibility of a daunting 3-0 deficit in its first-round playoff series, Memphis responded with a physical, rugged effort.