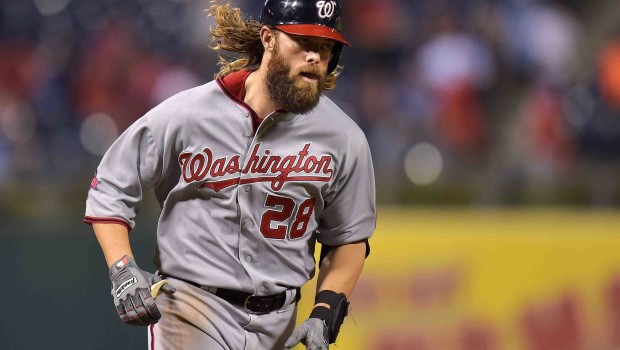 If you closed your eyes last night at the Bank, you could have remembered what it was like when the Phillies played meaningful games in September.

And on to October!

As it happens, the only meaning in last night’s 12-2 victory by the Washington Nationals was that it kept their hope to catch the New York Mets in NL East barely alive.

Werth and Harper each had four home runs in the three-game sweep of the Phils to help the Nationals pull within 7 1/2 games of the Mets with their fourth straight victory.

”We have to keep grinding and keep winning,” Harper said.

Darin Ruf homered for the Phils, who have dropped seven of 10.

”Not a lot to talk about tonight,” Phillies interim manager Pete Mackanin said. ”The only bright spot was Ruf’s home run.”

Gonzalez (11-7) allowed two runs on five hits with a pair of walks in seven innings.

Gonzalez, though, preferred to put the spotlight on Harper.

”He plays hard, plays like he’s having fun,” Gonzalez said. ”It’s just unbelievable and fun to watch. To say the sky’s the limit is an understatement. I think he has more than that.”

Werth put the Nationals up 2-0 in the fourth with a drive to left-center. After the Phillies tied it in the bottom of the frame on Ruf’s two-run shot to left, Washington scored two runs on five hits in the fifth to go up 4-2.

Werth led off the sixth with a solo homer to left-center. He had a pair of homers, including a grand slam, in Monday’s series-opening win.

”I always enjoy playing here and hitting here,” Werth, a member of the Phillies’ 2008 championship team, said. ”We need to win all of these games. It’s pretty much a must-win the rest of the way. A lot has to happen and we need to win every night.”
Harper then connected on a two-run, opposite-field shot with one out in the seventh.
”That’s a special talent,” Nationals manager Matt Williams said. ”He didn’t click that ball, but he got enough of it.”

Yunel Escobar went 2-for-5 with a double and two RBIs to continue his hot streak. He is batting .406 in his last 17 games.