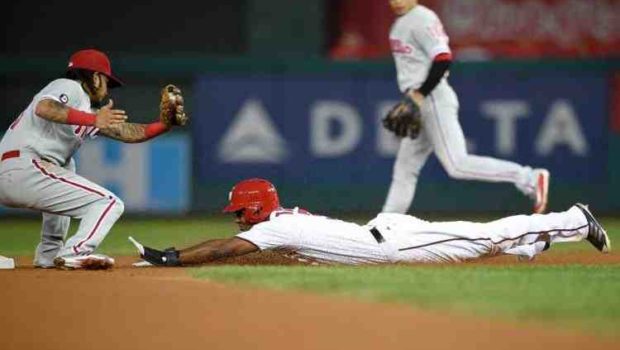 Trea Turner capped a three-run sixth inning with a two-run single, and the Nationals beat the Phillies 4-3.

Coupled with Miami’s 6-5 loss at Atlanta, the Nationals lowered their magic number for clinching the division to four.

Facing Adam Morgan with one out and the bases loaded, Turner sent a grounder up the middle to give Washington a 4-3 lead.

Jorge Alfaro and Tommy Joseph homered for the Phils, and Odubel Herrera extended his hitting streak to 20 games, the longest in the majors this season.

The Nationals trailed 3-1 when Lind led off the sixth with a single and advanced to third on a wild pitch and passed ball. He scored on a one-out double by Matt Wieters that chased Aaron Nola from the game.

The Phils’ Andres Blanco started the sixth with a fly ball to center that might have cleared the fence, but Taylor raced to the wall and made a leaping grab for the out.

Brandon Kintzler, Ryan Madson and Sean Doolittle combined for three scoreless innings in relief, with Doolittle earning his 16th save since coming to Washington.

Nola was charged with three runs, two earned, and seven hits. He struck out eight and walked two.

0 thoughts on “NATS RALLY TO GRAB OPENER FROM PHILS 4-3!”