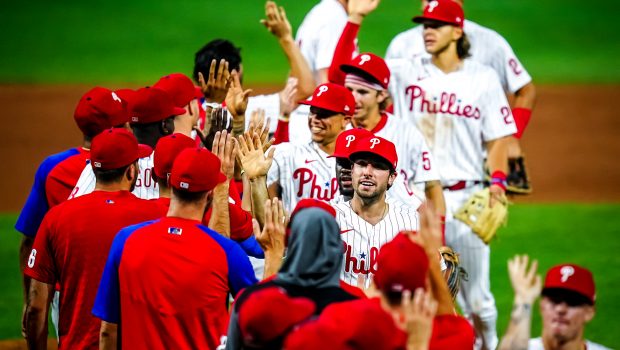 The Phillies smoked the lowly Washington Nationals last night 11-0, and they moved to 43-38, 5 games over .500 into a tie with the Cardinals for a playoff spot.

As interim manager Rob Thomson has said about the Phils climb up the ladder over the past month, “Once you get to .500, get 5 games over, then 10 games over,” and they’re on their way with a 20-9 record since Thomson took over as Phillies manager.

Rhys Hoskins hot bat continues after being named NL Player of the week, JT Realamuto and Nick Castellanos are also picking up the slack offensively, especially with Bryce Harper and Jean Segura still out with hand injuries.

The Phillies can beat up on the Nats this week before going to St. Louis for a 4-game set versus the Cardinals later this week, one of the teams they need to beat out for a playoff berth, their first in over 10 years.