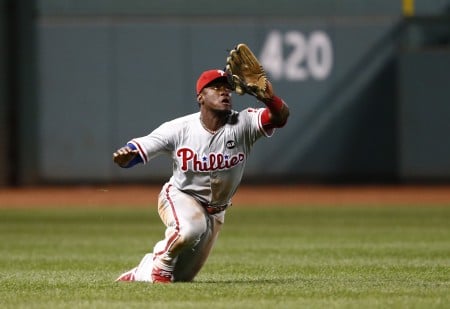 NATS’ BEAT PHILS 11-10, WITH SOME HELP FROM ODUBEL HERRERA!

Odubel Herrera taketh and he giveth.

In the Washington Nationals’ 11-10 victory over the Phils last night, Michael Taylor was the beneficiary of a gift from Phillies center fielder Herrera, who misplayed a Taylor line drive and turned it into an inside-the-park grand slam.

“We’re gonna need more of those kind of nights from Michael,” said skipper Dusty Baker, who has lost pretty much every outfielder on his roster to injury at some point this season. That includes Bryce Harper, who’s currently on the disabled with a knee injury and might or might not be back in time for the playoffs, and Jayson Werth, who is banged up again (shoulder) after missing almost three months with a broken foot.

It’s easy for Baker to feel good after what Taylor did on Friday, helping Washington to win by going 4-for-5 with five RBIs and three SOVs (standing ovations). His slam in the third, beside electrifying the crowd at Nationals Park, gave his team a 6-3 lead and produced the first ovation. The next ovation came in the top of the seventh, when with one out and Philly having already scored three times to cut the lead to 10-7, Taylor hosed down Nick Williams trying to score from second on a single for his eighth assist of the season (tied for fourth among National League outfielders).

In the bottom of the eighth, Taylor laced an RBI triple to left field (you know, the part of the park that’s really close to third base and therefore doesn’t typically yield triples), producing the third and final ovation, not to mention what turned out to be a much-needed insurance run. But the highlight of the night for Taylor — and everyone else in the stadium — was by far that thrilling third-inning gallop all the way around the bases.

If it weren’t for the hapless Phillies — who own baseball’s worst record — flubbing multiple plays immediately prior to Taylor’s at-bat, history might not have been made.

After Daniel Murphy drew a leadoff walk to start the bottom of the third, Ryan Zimmerman hit a grounder to second that Cesar Hernandez mishandled, putting men on first and second with nobody out. Anthony Rendon followed with a ground ball to first that looked like a potential double play, but rookieRhys Hoskins bobbled it and had no choice but to get the out at first, allowing both runners to advance — before Matt Wieters walked to load the bases. That brought up Taylor, Washington’s 7-hole hitter, who drilled a 106 mph line drive to center. That’s when the fun started.

“I could see Herrera break in, and then I could tell he was in trouble,” said No. 9 hitter Scherzer, who was in the hole for the festivities. “You could just see he wasn’t moving anymore, and he was getting ready to jump. I was like, this ball is going over his head. And it was just on for the races. I was wondering if they were going to hold him at third.”

What Scherzer didn’t know is that Taylor had no earthly intention of settling for a triple.

“As soon as it went over his head, I was thinking four,” said Taylor, whose head-first slide just barely beat the relay throw from Philly shortstop J.P. Crawford, much to the delight of everyone in the home dugout. 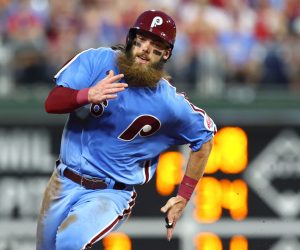